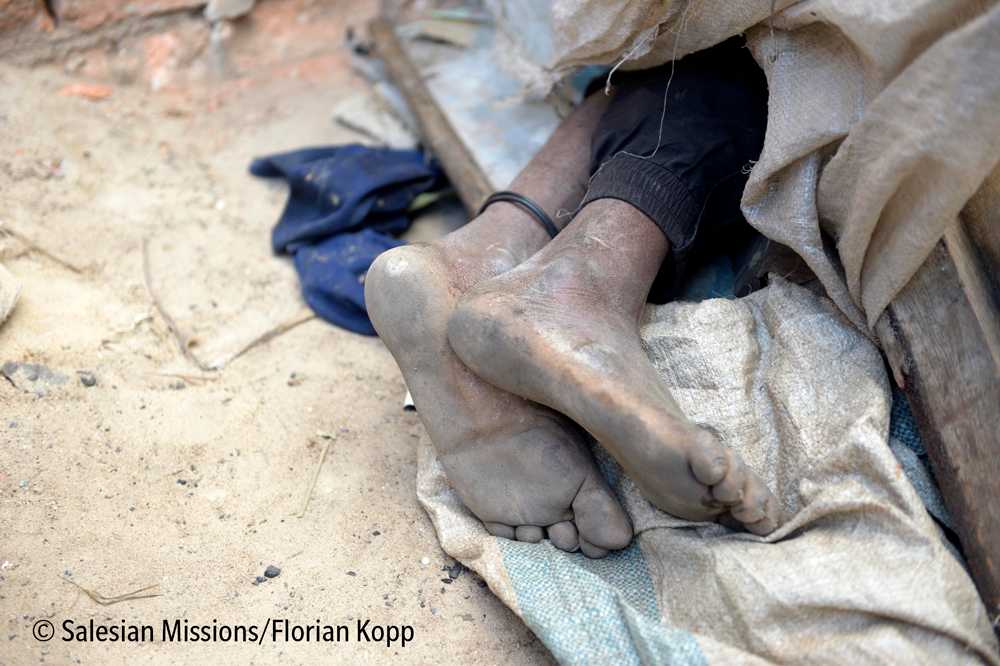 (MissionNewswire) Salesian Missions stands with the United Nations (UN) and organizations around the globe in highlighting the plight of children on the International Day for Street Children. The day provides organizations and the millions of street children in countries worldwide an opportunity to have their voices heard and ensures that their rights are not ignored.

Celebrated each year on April 12, the day was established by the UN to raise awareness of issues affecting youth forced to live on the streets. This year the focus of the day is on equality for street children. Street children are too often denied their rights to healthcare, shelter, nutrition, education, justice when they are harmed, and freedom from harassment and abuse.

Every day millions of street children suffer multiple and repeated violations of their rights, and as a result of ongoing conflicts in the Middle East, recession in Europe, natural disasters in Asia and Africa and many other factors, the number of children living on the streets is expected to rise, according to the Consortium for Street Children.

“Children who are living on the streets experience discrimination and exclusion every day,” says Father Mark Hyde, director of Salesian Missions, the U.S. development arm of the Salesians of Don Bosco. “Children who are able to access programs that help youth come in off the streets, where they face poverty and are at risk for exploitation, have a chance at a better life. Salesian programs aim to help children live safely while getting the emotional support they need and the education that will help them live independently.”

In honor of the International Day for Street Children, Salesian Missions is proud to share some of its programs around the globe that provide shelter, nutrition, education and hope for a better life for street children.

Don Bosco Foyer in Porto-Novo, the capital city of Benin, serves boys and girls in very complex situations, including youth who have been abandoned by their families, victims of abuse and those who are victims of forced marriages. The organization received funding from a donor through Salesian Missions to help support Salesian missionaries’ work with street children.

The program is a residential home for children coming directly from the street. Children’s most basic needs are met, including shelter, proper nutrition, clothing and access to adults who help them feel safe and protected from the exploitation and violence many faced while living on the streets. Salesian missionaries also operate Foyer Magone, which is another residential facility for youth who have stabilized after spending time at Don Bosco Foyer.

At Foyer Magone, youth are able to go to school and gain an education to help prepare them for the workforce. Youth are able to take workshops in subjects like carpentry, motorcycle mechanics and welding. Salesian missionaries also operate three accelerated learning schools focused on youth who have left the state-run schools or dropped out of the educational system altogether. Missionaries try to reach youth where they are while living on the street. The Salesian-run organization Foyer Mama Marguerte operates in the market of Cotonou, helping minors who are working instead of attending school and those who have been exploited into human trafficking.

Salesian missionaries arrived in Ghana 25 years ago and began their work with poor children and older youth and their families. One of the programs they launched was the Don Bosco Boys Home for street children. The program provides shelter, education and social development services for poor youth who have been abandoned, have runaway or are at risk of violence and exploitation. The program is directed by Salesian Father Ubaldino Andrade.

Don Bosco Boys Home, as well as other Salesian programs in Ghana, are focused on providing for the needs of human trafficking victims, as well as how to bring about awareness of this issue. According to a 2016 report from the United Nations Office on Drugs and Crime (UNODC), the vast majority of all human trafficking victims, some 71 percent, are women and girls and one third are children. Globally 28 percent of trafficking victims are children, but children account for 62 percent in Sub-Saharan Africa and 64 percent in Central America and the Caribbean.

Don Bosco Boys Home hosts 63 youth right now. Some are from the street or victims of human trafficking and abuse. Others are abandoned by their families and have nowhere else to turn. Don Bosco Boys House was originally set up in 1996 to help children who survive on the streets by bringing groceries to travelers in the local Sunyani markets. Their mission has expanded to meet the local need. According to Fr. Andrade, more than 400 children have been through the center in its 20 years of activity.

Lakay Don Bosco was established in 1988 in Port-au-Prince, Haiti by an Italian Salesian priest. The program was launched to address the needs of homeless and marginalized youth who lived in situations of neglect, negligence or serious social risk. Today, the Lakay project includes five facilities in Port-au-Prince and one, divided into two sectors, in Cap-Haïtien. Each of these structures was created to respond to needs of street youth. In total, nearly 5,700 minors benefit from this project, which is facilitated by 57 staff members.

The Lakay project centers are each specialized for the various stages of life and to the types of assistance needed by the youth. At Foyer Lakay, children live as a family for a period of four years until the completion of their apprenticeship in a technical profession. Lakay Program for Street Children provides shelter and educational services for street children in Cap-Haïtien and Port-au-Prince.

The Lakay Program for Street Children is also a recipient of Salesian Missions Hunger for Education project, which has been funded by the U.S Agency for International Development (USAID). The project aims to increase the health and learning capacity of students by implementing school feeding programs.

The Salesian-run Don Bosco Ashalayam manages two night shelters, one for girls and one for boys who are living on the streets. The two shelters are located within the vicinity of the Salesian main office in Howrah and help to connect youth with the shelter and services they need. When night comes, street children become particularly vulnerable, and these shelters provide a resource of safety and support for them.

Every evening, Don Bosco Ashalayam in Kolkata opens its doors to all children in need of a safe place to sleep. Children and older youth come stay the night but have the freedom to leave if they wish. The night shelters are strategically located close to the main Salesian homes for street children so if they have a positive experience at the night shelter, they can easily connect to a longer-term Salesian program and more stable environment if they desire. At the night shelters, youth can eat healthy meals, wash, receive medical care, and enjoy a safe place to study and socialize with friends.

At the end of every month, Don Bosco Ashalayam organizes a “mela” (festival) at the night shelter where street children can enjoy a welcome bath and haircut and change into new clothes. They play games, watch movies and eat. Come evening, everyone goes to sleep at the night shelter. These melas can also give children the opportunity to discover life at Don Bosco Ashalayam and to elect to remain in a safe, supportive environment.

Salesian missionaries have been serving in Sierra Leone since 2001, when they began working to rehabilitate former child soldiers. In the years since, Don Bosco Fambul, located in the country’s capital city of Freetown, has become one of the country’s leading child welfare organizations—offering food, clothing, crisis intervention services, shelter, educational opportunities, long-term counseling and family reunification.

Don Bosco Fambul reaches out to an estimated 2,500 street children in the region each year. Transformation for street youth starts with the Salesian rehabilitation and reunification programs operated at Don Bosco Fambul. The success of the street children rehabilitation program is credited to the organization’s holistic approach focusing on attending to basic needs (food, clothing and a safe place to sleep) as well as personalized medical, psychological, pedagogical, social and spiritual care of the children. This gradual process includes formal classes, daily games, sports, music, singing, drama, dancing, counseling and prayer. Parents and extended families are contacted several times by social workers before final reunification.