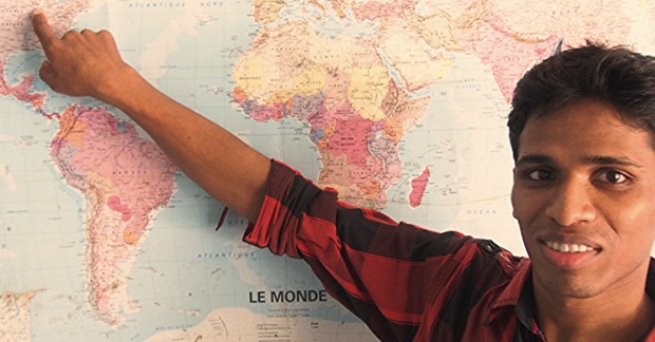 (MissionNewswire) The Salesian-run Don Bosco Ashalayam, operating in India’s capital city of New Delhi, offers a range of programs for disadvantaged youth. Reaching out to street children and others, the organization offers child helplines, shelters, schools and vocational programs. Outreach programs help to meet youth on the street where they are and offer them a fresh start in life.

Youth are able to visit the program and engage in social and educational activities, as well as receive support and meals. Through educational activities and games, youth also receive important lessons in terms of personal hygiene and sexual health, self-esteem, fears and substance abuse. Through these activities, some youth decide they want to formally enter one of the Don Bosco Ashalayam centers to live and study. This is what happened to Sanjoy.

“Don Bosco Ashalayam is the only family I have ever had,” says Sanjoy, a boy who grew up without parents. He remembers living on the streets, where he worked, slept and sought food to survive. He recalls that a family once offered him a place to stay, but he soon realized it was a scam. They treated him like a domestic slave, abused him and gave him no money. He was just 10 years old.

It was at that time that a social worker from Don Bosco Ashalayam saw Sanjoy begging in the streets and started talking to him. Sanjoy accepted the social worker’s invitation and he was sent to school. From that moment on, he no longer had to worry about finding food, a place to sleep or someone who was interested in him. It was the beginning of a new life for Sanjoy, the beginning of a new future.

“Don Bosco Ashalayam has offered me a life that goes beyond my dreams. I never imagined that a street boy like me could study in the United States. I feel so happy,” says Sanjoy today.

Sanjoy studied hard and received good grades, completing all his courses and went on to study electronics. Don Bosco Ashalayam helped him continue his studies, and now at 22, he has won a scholarship for Chicago’s DuPage College. He is attending college, completing his coursework and living in the U.S.

“All youth deserve a chance at a better life and access to the skills necessary to find and retain employment,” says Father Mark Hyde, executive director of Salesian Missions, the U.S. development arm of the Salesians of Don Bosco. “To help close the employment gap and help youth like Sanjoy, Don Bosco Ashalayam helps youth gain a foothold in the competitive job market by providing employment and soft skills training in an environment of learning and mentoring that is responsive to the individual’s emotional and developmental needs.”

ANS – India – Sanjoy, from street kid to studying in USA, thanks to “Don Bosco Ashalayam.”