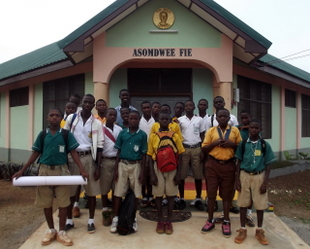 (MissionNewswire) Don Bosco Boys Home is a Salesian-run program for street children in Sunyani, Ghana. The program provides shelter, education and social development services for poor youth who have been abandoned, have runaway or are at risk of violence and exploitation. The program is directed by Salesian Father Ubaldino Andrade.

“Every child is like a book and every chapter engages me more and more as I get to learn more about their lives and they tell me about their joys and sorrows, their plans, their hopes and their dreams,” says Fr. Andrade.

One young student at Don Bosco Boys Home is Shata, a child who was abandoned at birth by his parents when they realized he has a disability. Shata does not speak English but understands the local language and can make himself understood. He has a head deformity and leg problems, but he runs and jumps like any child. He was found and taken from the streets by Fr. Andrade, who has been caring for him at the Salesian program. Shata is much loved and known for his generosity.

“More than once I’ve seen Shata share what he has with his mates, and when he returns from school, he changes his clothes and cleans everything he finds without anyone asking him to,” adds Fr. Andrade. “Shata has a treasure. It is a small broken mirror, no bigger than the palm of his hand, and he cares for it as if it were the most precious thing in the world.”

A few weeks ago, Fr. Andrade accompanied Shata to the town where he had been abandoned to locate the boy’s mother and obtain documents that would show his age. To Fr. Andrade’s surprise, many people recognized and were surprised to see him. Shata recognized them and greeted them. But Fr. Andrade was saddened to find out that the people did not call him Shata, but used other names including shamefully, “Ebola” from the time Shata was dirty, sick and abandoned on the streets.

“Even without being professionals, and although sometimes we do not know what to do, to kids like Shata we are offering the best possible medicine for their lives, which is love and safe place to grow up,” concludes Fr. Andrade.

Salesian programs in Ghana and around the globe provide programs and services for youth like Shanta who have nowhere else to turn. The education at Salesian schools and safe shelter and care by adults in Salesian homes is sometimes the only access youth have to a normal childhood and second chance for hope for the future.