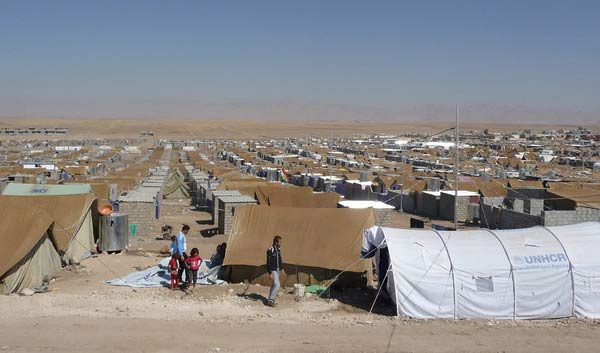 (United Nations) Marking World Refugee Day, United Nations officials highlighted the plight of millions of refugees and internally displaced persons (IDPs) across the globe, and urged countries to boost efforts to prevent and resolve conflicts that have caused massive displacement.

“There are now more than 45 million refugees and internally displaced people – the highest level in nearly 20 years. Last year alone, someone was forced to abandon their home every four seconds,” Secretary-General Ban Ki-moon said in his message for World Refugee Day, observed annually on 20 June.

The Office of the UN High Commissioner for Refugees (UNHCR) released yesterday its Global Trends report, which showed that at the end of 2012, more than 45.2 million people were in situations of displacement, compared to 42.5 million at the end of 2011. The report also pointed to the conflict in Syria as a major factor for the spike in displacement and noted that nearly half of all refugees are below the age of 18.

Yet, Mr. Ban stressed that figures give “only a glimpse of this enormous human tragedy.” Indeed, he said, every day, conflict tears apart the lives of thousands of families. “They may be forced to leave loved ones behind or become separated in the chaos of war.”

The UN chief noted that forced displacement affects not just those fleeing conflict but also has a significant economic, social and sometime political impact on host countries. Currently 81 per cent of the world’s refugees are hosted by developing countries and more than half of refugees come from just five war-affected countries: Afghanistan, Somalia, Iraq, Syria and Sudan.

World Refugee Day was established by the UN General Assembly in late 2000 and this year focuses on families.

UN High Commissioner for Refugees António Guterres drew special attention to the situation faced by families in Syria, where some 1.6 million people have been displaced since the crisis started over two years ago.

“In all the years I have worked on behalf of refugees, this is the most worrying I have ever witnessed. The needs of these people are overwhelming; their anguish is unbearable,” said Mr. Guterres, who is currently in Jordan with UNHCR Special Envoy Angelina Jolie meeting with Syrian refugees.

Mr. Guterres said he feared “that an entire nation is being left to self-destruct as it empties itself of its people,” and was worried that “with no clear political resolution in sight, this civil war is in real danger of sliding into a regional conflict.”

For her part, Ertharin Cousin, Executive Director of the World Food Programme (WFP), stressed that the international community has a responsibility to advocate on behalf of displaced people everywhere, and added that the situation in Syria is particularly worrying due to its scale.

“Every woman, man and child who has left behind homes, family, jobs, education and lives in search of security and safety deserve our attention and, most importantly, our assistance,” she said.

“For over two years, the world has witnessed millions of Syrians fleeing their homes, escaping from violence in search of a safe haven […] The needs of conflict-affected Syrians are huge, almost too big to comprehend,” she said, adding that WFP hopes to reach 7 million displaced persons inside and outside Syria.

To mark the Day, UNHCR has organized events across the world in conjunction with its partners. These include film screenings, panel discussions, food bazaars, light shows, cultural performances, concerts and sport contests, among other events.

In Australia, UNHCR’s office announced the 12 winners of its World Refugee Day Art Contest, which asked participants to examine the theme “1 Family torn apart by war is too many.” In Japan, student designers held a fashion show of UN blue-themed costumes from 20 refugee-producing and hosting countries, and in the Republic of Korea, a “Friends of UNHCR” initiative kicked off with about 20 parliamentarians committed to working together for refugee protection.

Refugee film festivals also opened in Hong Kong and Thailand to give the public a glimpse into the lives and experiences of refugees. In the Philippines, pedicab drivers – many of them refugees – wore World Refugee Day T-shirts to raise awareness of displacement issues in the region.

In Syria, UNHCR and its partners are organizing arts, sports and social activities for refugees and host communities in areas like Damascus, Aleppo and Homs. In neighboring Iraq, Syrian refugees in and around the northern city of Erbil were set to perform traditional Kurdish songs for an audience at the famous Citadel while refugees in the southern city of Basra will be treated to mobile theatre.

African countries also took part in the Day’s commemoration. In Kenya, UNHCR hosted the African premiere of “A Hijacking,” a film about piracy off the coast of Somalia that reflects how a lack of alternatives can drive displaced youth to take drastic measures. In Tanzania, a photo exhibition showcases the works of Congolese refugees and local children.

In addition, United States-based refugee marathon runner Guor Marial is leading a five kilometre run in his native South Sudan, where he recently returned with the help of UNHCR after 20 years.