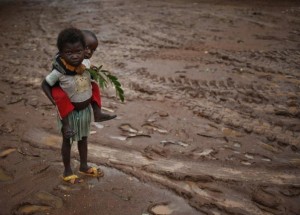 (MissionNewswire) Close to 300 people each week, the majority under the age of 15, are receiving life-saving medical aid at a Salesian-run center in the city of Bangui in the Central African Republic. The donation was made possible due to an ongoing partnership between Salesian Missions 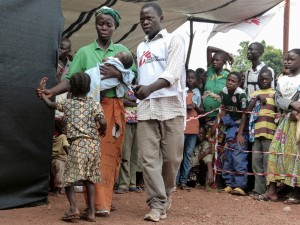 (Doctors Without Borders) Médecins Sans Frontières/Doctors Without Borders (MSF) reiterates its call for the respect of civilians, medical staff and health facilities Despite the presence of international armed forces in the capital of Central African Republic (CAR), fighting, lynchings and violent attacks are still a daily occurrence in

(MissionNewswire) Ivory Coast – New fears grow along with the number of people seeking safe shelter at a Salesian Missions compound in Duékoué. More than 30,000 displaced civilians are now living there after fleeing their homes when the Carrefour district was looted and houses set on fire on March 29. At least 800 people were killed.

“There is no food, people are sleeping on the ground, there is nowhere else to go,” says Salesian Father Vicente Grupeli. “There are no toilets or washing facilities and we have no drinking water.”

They also are without adequate food and water. However, Fr. Grupeli’s greatest fear is a cholera outbreak, which he says is a serious threat if more aid is not received soon.

A Doctors Without Borders/Médecins Sans Frontières (MSF) team has been providing medical care in the Salesian compound in Duékoué on a daily basis since December. On April 19, MSF reported:

The pressure on the camp is enormous. The number of people sheltering there far surpasses its capacity, and more are continuing to arrive. In surrounding villages, many people are still hoping to make their way to this dreadful safe haven.

“In our dispensary, consultations have recently doubled and in some rooms we have two consultants because of the lack of space,” says Dr. Mohamadou Seyni, who coordinates MSF’s activities in the camp. “After the days of violence, we had a lot of trauma and injuries that we needed to refer to our team in the hospital in town, but now most of our consultations are for malaria. Yesterday, out of 120 children tested, 80 had malaria.”

On April 4, the Salesian Info Agency (ANS) reported that “there are only two Salesians there who have to try to respond to the appeals for help from about 20,000 people.”

Since then, the number of people seeking shelter and assistance at the Salesian compound has grown to at least 30,000. A report from the International Organization for Migration (IOM) confirms the massive numbers and shows completed registrations for more than 27,500 internally displaced persons (IDPs) seeking refuge in and around the Salesian compound in Duékoué.

The numbers are growing and people are afraid to leave and return home.

“It would be naive to believe that they will return home immediately,” says Fr. Gupeli.

The fears are warranted. Catholic News Service (CNS) reported that armed robbers attacked members of the faculty of a Jesuit-run theology school in the Ivorian capital of Abidjan on April 17, as the priests were preparing for dinner. Students have not been at the school for several months due to escalating violence in the area. The robbers entered school grounds by jumping over a security wall, then quickly disarmed the guards on duty and attacked a deacon.

This illustrates why U.N. forces have guarded the Salesian compound ever since the violence erupted, making it one of the only places civilians feel safe (even with the health threats they face due to lack of adequate clean water and sanitation). Like all Salesian workings around the globe, safety is paramount and is evident in the large security walls and guards. But the presence of the U.N. forces doesn’t ease the fears of the people. Rather, it indicates the seriousness of the situation.

“This does not mean that there is more security,” says Fr. Gupeli. “On the contrary, the people are afraid.”

The Salesian Missions compound — created to serve as a vocational training center, a home for children and a youth center — suspended all activities to care for the tens of thousands who have overwhelmed the facility, according to Fr. Grupeli.

ANS reports, “to cope with this tragic situation, the Salesians and the refugees are in urgent need of help from the main humanitarian aid agencies.”

The Salesian mission office in Madrid launched an urgent appeal for food, water, medical supplies and other needs that are in short supply. Information about the campaign can be found at www.misionessalesianas.org.