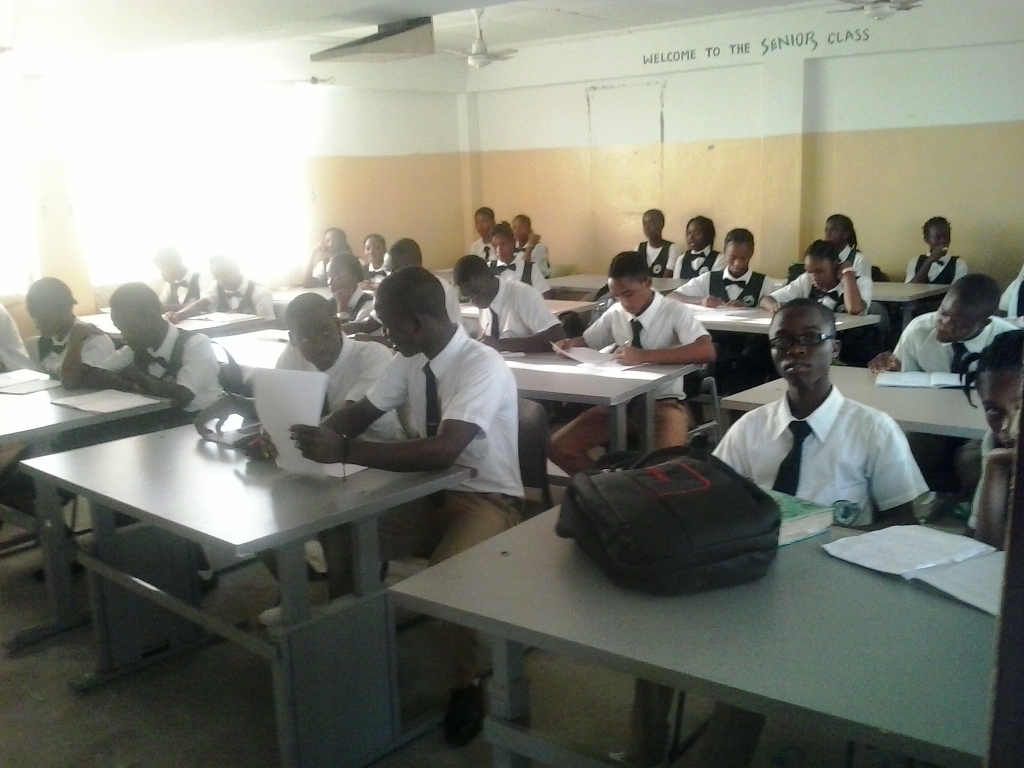 (MissionNewswire) The Salesian-run Mary Help of Christians Catholic High School, the Blessed Sandor Matadi Salesian Community offices and the Holy Innocents Matadi Foundation office, all located in Liberia’s capital city of Monrovia, received new furniture thanks to an ongoing partnership between Salesian Missions and the Institution Recycling Network (IRN). More than 500 students benefited from the new furniture which is being used in classrooms, libraries, laboratories and school offices.

New desks, chairs, tables, bookcases and filing cabinets were among the furniture received in Monrovia. Desks and chairs help to provide a more dignified and organized educational environment for students to complete their studies. As a result, students are often more focused on classroom work and more prepared for their lessons.

“This donation is especially important for the children in our schools,” says Father Mark Hyde, executive director of Salesian Missions, the U.S development arm of the Salesians of Don Bosco. “The furniture has contributed greatly to their discipline and learning environment while bringing smiles to their faces. This has been a great contribution to the high school.”

The Institution Recycling Network was started in 1999 to match surplus items that need to be recycled with organizations and people who need them. Every educational, commercial and healthcare organization in the U.S. has surplus furniture and equipment. Hundreds of millions of people living in poverty or recovering from natural disasters worldwide are in desperate need of the kinds of surplus goods these very organizations are discarding. IRN makes the match and facilitates the distribution of the surplus into the hands of the organizations and people who need it most.

“There is a clear match between Salesian Missions’ need for furniture and equipment for their worldwide projects and the supplies of surplus to which IRN has access,” says Mark Lennon, principal of the Institution Recycling Network. “Salesian Missions has been an excellent partner.”

IRN partners with nonprofits who are known to be reputable and effective providers of relief and development assistance, and who are able to use the types of surplus that IRN can provide. The organization has a “wish list” from each of its nonprofit partners of the types and quantities of surplus they can use.

When a project comes to IRN, it makes a match against these wish lists and offers the surplus to the most appropriate nonprofits. At this point, surplus is offered on a first-come-first-served basis; the first nonprofit(s) to express interest in the surplus, receives it. In many cases, a single nonprofit will claim the entire project but in some cases, the surplus will be split among two or more organizations.

“There is almost infinite demand in the U.S. and worldwide for good quality surplus so IRN’s surplus program will continue to grow,” says Lennon. “The school or company that supplies the surplus pays IRN for the service of matching their surplus with our nonprofit network. In almost all cases they pay IRN much less than they would pay to bring in dumpsters and throw the surplus away.”

In addition to the recent shipment to Liberia, additional furniture from the same source has been donated to Salesian programs in the Sierra Leone, Ivory Coast, Vietnam and East Timor.

“IRN donations have furnished Salesian schools and development offices in Central America, South America, Africa and Asia,” adds Fr. Hyde. “We plan to continue working with IRN because they are a reliable partner who is eager to assist in our mission and provide quality donations to our programs.”

Liberia is one of the poorest countries in the world with 64 percent of its population of 3.5 million people living below the poverty line, according to the World Bank. The 2014 Human Development Index ranks Liberia 175 out of 187 countries. Still recovering from the effects of a 14 year civil war that ended in 2003 and the most recent Ebola outbreak, Liberians struggle with social and economic hardships.

Those living in rural areas make up close to 75 percent of the country’s poor and the World Bank classifies Liberia as a low-income, food-deficit country, reporting that half of the population is food-insecure or highly vulnerable to food insecurity. Orphans, street children and adolescent ex-combatants often find themselves on their own facing adult responsibilities with little support and no education.