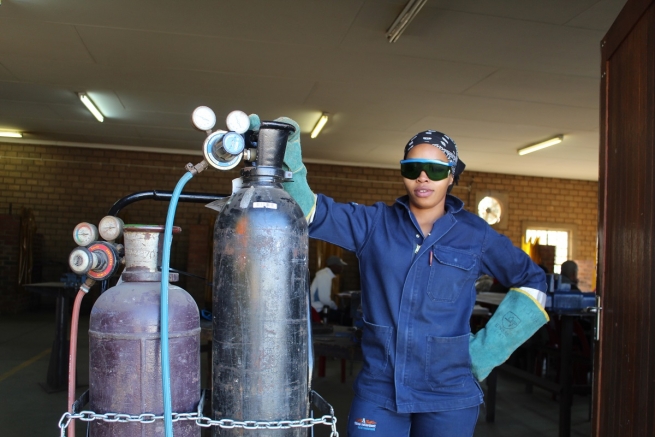 (MissionNewswire) Salesian missionaries operate the Don Bosco Educational Projects, located in Ennerdale, a suburb of Johannesburg, South Africa. Innocentia Vilakazi is a welding instructor at the school. She succeeds in a male-dominated occupation and has a message for all young South African women who, like her, cultivate a passion. She tells them, “Always remember your worth.”

Vilakazi loves her work and working environment at the Don Bosco school. Mostly especially, she enjoys encouraging her students. She says, “I learn to appreciate these young people because they come from backgrounds that are tough and challenging. I learn to appreciate their talents and skills. Sometimes I want to fix situations that these youngsters go through, but then you realize, you can’t fix every situation. You can listen to what these young people go through. We can only do so much for them.”

One of the reasons Vilakazi likes working at Don Bosco Educational Projects so much is the personal growth that comes with the professional training for her students. She adds, “Here we work on their faith and we work on their personal and interpersonal skills. More is invested in developing the person. Just as the career is important, so too the soul, the spirit has to be taken care of.”

As a female welder, Vilakazi has faced her share of discrimination and notes she is more prone to exploitation. She has had employers look at her resume and think because she is a woman, she can’t work as fast as a man or as hard as a man. She counters that argument and says, “In actual truth, women are far better welders than men because it is a very delicate skill that requires precision. We live in a very superficial time where everyone wants to look pretty, have our nice nails…and then you get girls like me who are welders.”

In all of the work that Vilakazi does, at the heart is challenging her students to always do better and aim higher.

“You get youngsters who start this course and say to themselves, ‘I want to make burglar bars’ and I think to myself—no that’s not enough,” explains Vilakazi. “I tell them you must aim higher, design power stations, make boilers, create bigger things. When you have worked on a big project with others you can say that you made that. My stamp is on that. I’m proud to say that I was involved in the construction of the 2010 World Cup Stadia. I was even involved in the construction of the famous Medupi Power Station.”

Salesian missionaries have been working to restore hope in South Africa, particularly among poor youth. From empowering girls and young women to building schools and teaching trade skills, missionaries have a long history of affecting change in the country.