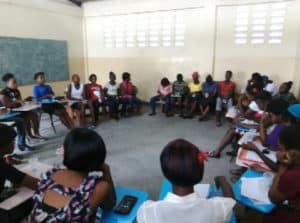 (MissionNewswire) The Rinaldi Foundation, the Salesian Planning and Development Office in Haiti, has been funded for a second year of a project to aid young adults—aged 18 to 27—to gain work experience and find employment. The project has been made possible through the support of the Community Violence Reduction section of the United Nations Stabilization Mission in Haiti.

The project, which was funded for a second year in September 2018, is giving 90 more youth from Port-au-Prince the opportunity to participate in internships and enabling 12 young adults from Cap-Haïtien to have the chance to launch a new transportation service.

Working in conjunction with Lakou Don Bosco and Lakay Don Bosco, both in Port-au-Prince, 90 at-risk young adults were selected to benefit from the program in the first phase of funding. The initial phase of the project placed the youth in three-month internships at 43 different enterprises related to the participants’ previous studies.

During this period, they also received support from psychologists and program staff. Education was also provided on such topics as resume writing, interviewing for a job, stress management, rights and duties in the workplace, and ethics. In addition, a violence reduction curriculum was presented.

Upon the completion of the internships, additional support was provided for those young adults who had not yet been offered employment. Program staff aided some of the participants in the formation of nine small cooperative enterprises in the tailoring and cosmetology sectors. Additional opportunities were provided to other participants at Lakay Don Bosco in the production of goods for sale.

At the end of the first phase of the program, 85.5 percent of the participants had an opportunity to earn a living. This included 16 youth who found work after the internship, 43 who are now engaged in small cooperative enterprises and 18 youth who are involved in production work at Lakay Don Bosco.

“Salesian programs such as this provide the education and workforce development services to help youth find and retain employment, ensuring their future is productive,” says Father Mark Hyde, director of Salesian Missions, the U.S. development arm of the Salesians of Don Bosco. “Keeping youth engaged in their studies, while educating about the dangers of violence and risky behavior, helps youth stay focused on long-term goals and dreams and have hope for the future.”

Salesian missionaries began working in Haiti in 1935 in response to the Haitian government’s request for a professional school. Since then, Salesian missionaries have expanded their work to include 10 main educational centers and more than 200 schools across the country.

The 10 main centers each include a number of primary and secondary schools, vocational training centers and other programs for street children and youth in need. Salesian programs are located throughout Haiti including in the cities of Port-au-Prince, Fort-Liberté, Cap-Haïtien, Les Cayes and Gressier. Today, Salesian missionaries in Haiti provide the largest source of education outside of the Haitian government and their programs serve more than 25,000 Haitian children.

Haiti is the poorest country in the Americas ranking 163 out of 188 countries on the United Nations Human Development Index. The country also faces the highest levels of severe food insecurity in the world, according to the World Food Programme. More than half of the country’s population was chronically undernourished during 2012 to 2014, representing a total of 5.3 million Haitians. Nearly 100,000 Haitian children under the age of 5 suffer from acute malnutrition, causing irreversible stunted growth for close to 30 percent of all children in the country.