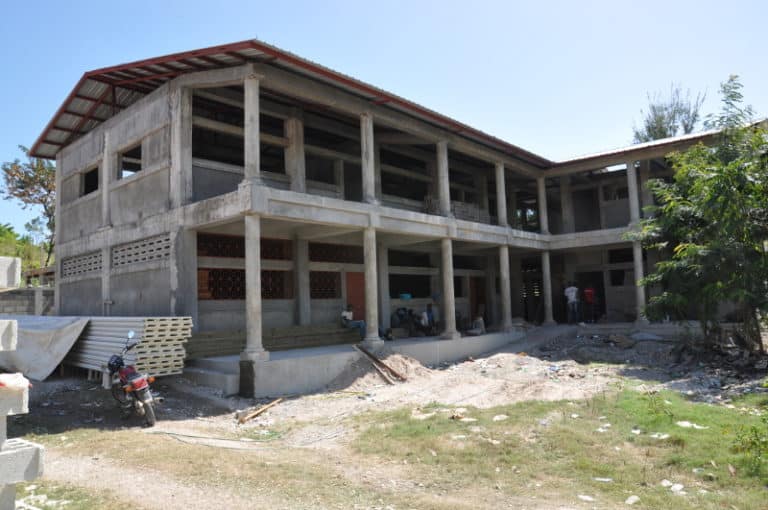 (MissionNewswire) A new Salesian elementary school was built in Les Cayes, Haiti, in 2018 to accommodate additional students. The school, built through the Rinaldi Foundation, welcomed its initial first grade class in September 2018. Featuring nine classrooms, student and teacher bathrooms, two computer rooms and administrative offices, the school will serve 360 children from the area each year. These students will have the opportunity to access elementary education which lays the foundation for later study.

The Rinaldi Foundation notes, “Education is a gateway to personal growth and economic opportunity, but for those in Haiti, obtaining a quality education can be a great challenge. Schools, especially in rural areas, are scarce and often of poor quality. Some teachers may be responsible for instructing more than 100 students in a single classroom. It is no surprise therefore that only 21.5 percent of the population have received a secondary-level education.”

The Rinaldi Foundation serves as the planning and development office of the Salesians of Don Bosco in Haiti. More than 22,000 youth and community members benefit from the schools, youth programs and ministry provided by Salesian missionaries in the country each year. For these Salesian missionaries, schools and youth programs fulfill an important socio-economic mission by providing poor youth a foundation for lifelong learning through education and training in skills and trades to help them escape poverty and establish a sustainable livelihood.

Salesian missionaries began working in Haiti in 1935 in response to the Haitian government’s request for a professional school. Since then, they have expanded their work to include 10 main educational centers and more than 200 schools across the country.

The 10 main centers each include a number of primary and secondary schools, vocational training centers and other programs for street children and youth in need. Salesian programs are located throughout Haiti including in the cities of Port-au-Prince, Fort-Liberté, Cap-Haïtien, Les Cayes and Gressier. Today, Salesian missionaries in Haiti provide the largest source of education outside of the Haitian government and their programs serve more than 25,000 Haitian children.