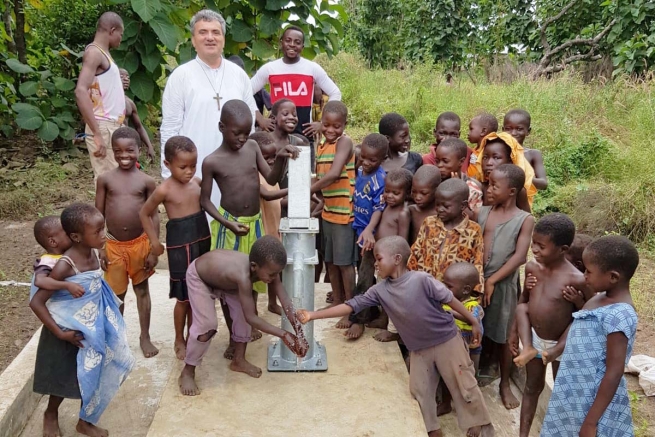 (MissionNewswire) Salesian missionaries in Ghana operate in more than 50 villages and communities with the number of inhabitants ranging from 70 to 3,500 in each. Most are small settlements cut off from the main cities that rely on streams or surface water courses for their water supply and have weak or non-existent road networks.

Accessible water sources can be up to 5 km away from some villages and are not always hygienically safe. In addition, most of them dry up during the dry season leaving little, if any, non-potable water available causing communities to quarrel among themselves to divide what little remains.

To help address these water shortages, Salesian missionaries are working to supply these communities with clean, safe water. Thanks to international Salesian support, 18 water projects have been launched (with some completed). There have been 11 projects in the Sunyani region in the center-west of the country and seven in Tatale at the eastern end of the country near the border with Togo.

Many of the projects entail developing wells with hand-pump boreholes as well as the installation of water towers and tanks. Three projects utilized mechanized borehole wells and a mechanized solar-powered water pump. Overall, these water projects are benefiting more than 4,000 people in the area of Sunyani and another 3,430 in the Tatale area.

“Provision of water, as well as a work of mercy, is integral part of our pastoral strategy based on holistic human development, respect for human rights and preventive pedagogy,” says Benson Osei-Savio Boateng of the Office of Planning and Development of the AFW Province.

UN-Water estimates that worldwide 2.1 billion people lack access to safely managed drinking water services and by 2050, the world’s population will have grown by an estimated 2 billion people pushing global water demand up to 30 percent higher than today. One in four primary schools have no drinking water service with students using unprotected water sources or going thirsty. In addition, UN-Water notes that more than 700 children under 5 years of age die every day from diarrheal disease linked to unsafe water and poor sanitation.

“Water is essential for life, and it’s critical that Salesian programs around the globe have access to safe, clean water for the health and safety of those we serve,” says Father Mark Hyde, director of Salesian Missions, the U.S. development arm of the Salesians of Don Bosco. “Improving water and sanitation facilities brings a sense of dignity to children and ensures that teachers and students are working and learning in an environment that promotes proper hygiene and has safe drinking water. This reduces the number of waterborne illnesses that can affect those in our schools, keeping them away from important study time.”