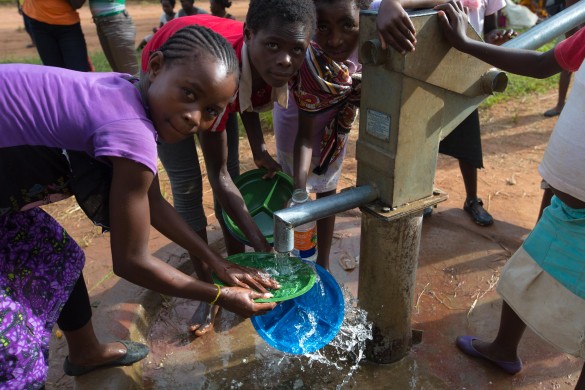 (MissionNewswire) As part of its Clean Water Initiative, Salesian Missions, the U.S. development arm of the Salesians of Don Bosco, has provided the Don Bosco Youth Center in the Chingola district of Zambia with the funding for a water restoration project. The project benefited more than 200 youth and 30 staff from the Salesian school, another 200 youth who access drop-in programs at the youth center each week and young pre-novices studying to become Salesian priests.

The Don Bosco Youth Center had been relying on the original borehole that was dug as their only source of water. Due to the dropping water level that has been caused by the continued mining in Chingola, the borehole had collapsed. It also caused the loss of the submersible pump. A professional company advised the center staff that in order to meet the increased demand for water a new borehole needed to be dug and a new pump needed to be installed. Salesian staff also separated the water lines with the addition of new piping to each of the existing structures for better water circulation.

“From safe drinking water and healthy sanitation to agriculture, water is essential for life,” says Father Mark Hyde, executive director of Salesian Missions. “This water restoration project will greatly impact the youth and staff who participate in education and social programs at the Don Bosco Youth Center. Having access to clean, safe water brings a sense of dignity to people and also reduces the number of water borne illnesses that people are susceptible to without it.”

Four different programs within the Don Bosco Youth Center are positively affected by this water project. Salesian missionaries offer technical education through the Salesian Technical College and Secondary Technical School. The college is currently offering four courses in metal fabrication, auto mechanics, general agriculture and information technology. In 2016, Salesian missionaries opened the secondary education programs, taking advantage of the new secondary curriculum in Zambia. Some of the school teachers live nearby at the Don Bosco Flats, which is part of the infrastructure of the Don Bosco Youth Center. The community is also finalizing an extension project that will allow 600 students in secondary technical school plus future boarding facilities for male students.

The clean water project also impacted youth who attend the youth center for recreational and other social and spiritual programs. Youth are able to take part in a range of activities from team sports like basketball, football and volleyball to other activities including reading in the library, swimming in the pool and playing music in the band. Another program, the Magone School, provides once a month programs for youth who need extra attention and a supportive environment, more than what is offered at their regular school. Youth are able to engage in educational lessons and recreation activities. Most important is the structure and care they receive from adults.