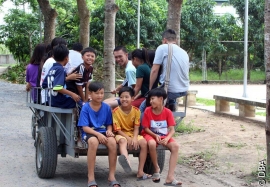 (MissionNewswire) Salesian missionaries have parishes and vocational training schools across Vietnam. Today, 330 Salesians of Don Bosco work in the St. John Bosco Province, which includes 33 communities in Vietnam and two in Mongolia. They first started opening parishes and then later branched out to open schools.

Each new training center begins modestly and gradually based on funding and resources. The Don Bosco School in Phuoc Loc, which started in 1993, now has 700 students with 150 students graduating in automobile mechanics, general mechanics or welding. The school is operated by 40 teachers, including eight Salesian missionaries.

At another program in Ho Chi Minh City, the capital of Vietnam, a Salesian school offers youth with disabilities a chance to learn a trade and an opportunity for self-sufficiency. The bakery school was started by Francis Van Hoi, a Salesian graduate from Vietnam who is now living in Germany. He was concerned about youth in Vietnam who lacked educational opportunities and wanted to give them a chance at a better life like he had through Salesian schools.

Noting the close to 50 four- and five-star hotels and hundreds of restaurants with different and interesting culinary offerings located in Ho Chi Minh City that needed well-trained staff, Van Hoi thought this type of training would be a fast track for youth to access jobs right in their own backyard. The Salesian bakery school was opened in the summer of 2016. It works in collaboration with the local Salesian school for cooking and catering that had already been in operation offering high quality training to the students.

“We always have a lot of requests from companies and hotels that rely on our training because we do not teach only job skills, but rather we serve the students in their entirety, in business protocol, civic education, hygiene, social skills and more,” says Van Hoi.

These and other Salesian training centers often do not have many resources because school fees are deliberately kept low to help students and their families. Students frequently reside in boarding houses on campus because it would be otherwise too difficult for them to go home every weekend. In addition, Salesian missionaries often provide financial support to families, provided the young person is seriously willing to learn.

In order to cope with the lack of qualified teachers in these regions of Vietnam, the centers often set up partnerships with companies so that business professionals are able to teach and have the certainty of a qualified workforce in the future.

The Salesian professional schools also welcome young migrants. Salesian missionaries report that nearly 50 percent of Vietnamese youth now live in urban areas. Many came from outside of the city looking for a job. Once they arrive its more challenging than they thought and often turn to Salesian school for skills training, a place to live and support while away from their families.

According to the World Bank, close to 14 percent of Vietnam’s population lives in conditions of poverty. The country has seen a drastic reduction of poverty over the last 20 years when the poverty rate was close to 60 percent. Vietnam has also made remarkable progress in education. Primary and secondary enrollments for those in poverty have reached more than 90 percent and 70 percent respectively. Rising levels of education and diversification into off-farm activities, such as working in construction, factories or domestic housework, have also contributed to reducing poverty in the country.

While nearly 30 million Vietnamese have been lifted out of poverty in the past 20 years, challenges remain. According to the World Bank, although Vietnam’s 53 ethnic minority groups make up less than 15 percent of the population, they accounted for nearly 50 percent of the poor in 2010. Most minorities continue to reside in more isolated and less productive regions of Vietnam. Rapid economic transformation and growth have contributed to rising inequality in income and opportunities. Some of the poor, especially those living in rural areas or small cities, have limited access to high quality education and health services and limited long-term well-paying jobs.

ANS – Vietnam – The Salesians of Don Bosco in a changing country