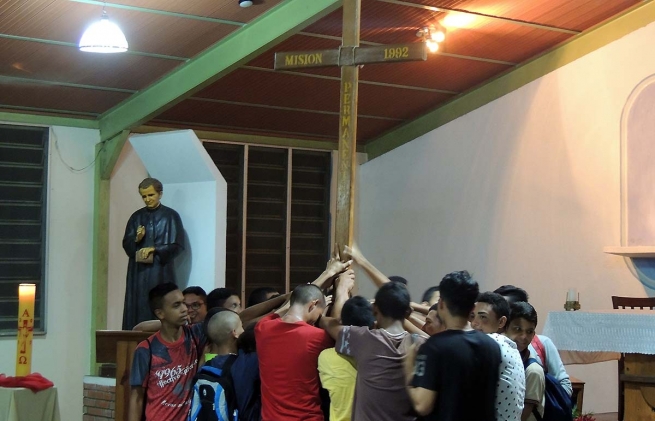 (MissionNewswire) For more than 30 years, Salesian missionaries have operated the San José Agricultural School in Barinas, Venezuela. The Salesiana de Barinas Center, as it is known in the area, began as an agricultural school in Naguanagua, in the state of Carabobo in 1934, and moved to the western plains of Barinas in 1984. The center itself has a long history among Venezuelan camps with hundreds of students who have graduated from its agricultural studies program.

The center offers its students an opportunity to combine theory with practice. The young students learn through a hands-on approach and learning in a classroom. They are able to take their classroom skills and put them directly to work on the farm fields that are a part of the center. Students are taught theoretical and practical courses in greenhouses, growing vegetables, cereal crops, gardening, animal husbandry and veterinary sciences, breeding, and about milk, cheese and dairy products.

“The Salesian school was specifically opened to provide technical education mainly to poor young children with scarce resources, and instruct them on technical and practical knowledge that would allow them to earn a living and give back to their communities,” says Father Mark Hyde, executive director of Salesian Missions, the U.S. development arm of the Salesians of Don Bosco. “Missionaries provide education and workforce development paired with other social services to help poor youth break the cycle of poverty and have hope for the future.”

The mission of the school is to provide young farmers with a basic education as well as advanced studies in the latest agricultural practices and modern technologies while moving towards efficiency in farming by exploring and testing new techniques in agriculture, horticulture, floriculture and animal husbandry. Salesian missionaries hope the agriculture degree program will entice more local youth to choose agriculture as their long-term livelihood. With a long history of providing agricultural education, missionaries currently operate more than 90 agriculture schools around the world.

Venezuela is experiencing the worst economic crisis in its history, with an inflation rate of more than 400 percent and a volatile exchange rate. The World Bank, as well as the latest data provided by the Venezuela Living Conditions Survey in 2016, found around 81 percent of Venezuelan households are now living in income poverty, up from 75.6 percent in 2015. This has led to political and social unrest in the country.

It’s been reported that both food and medicine in the country is also scarce. The oil price crash in 2014 and resulting policies byPresident Nicolas Maduro have led to mass shortages of food and other products. The International Monetary Fund (IMF) predicts inflation will reach 1,642 percent by the end of 2017. As many as 85 of every 100 medicines are missing in the country. Shortages are so extreme that patients sometimes take medicines ill-suited for their conditions.