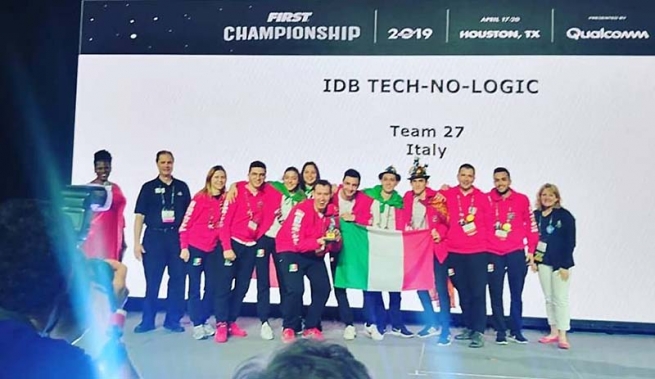 (MissionNewswire) Students from the Salesian Institute of Verona, Italy are celebrating their recent win at the FIRST LEGO League World Championship which challenges young students to think like scientists and engineers. The Salesian students came in first place in the championship which was held on April 20 in Houston, Texas. There were 108 teams from all over the world that competed against each other. These teams were selected to compete during national championships in each country and were among 40,000 candidate teams.

This is the first time an Italian team was crowned the winner of this leading world science and robotics competition. The theme for this year’s competition was, “Into orbit.” The teams were challenged by NASA to invent solutions to improve the living conditions of astronauts in space.

Students and teachers from the Salesian Institute of Verona created the Wemit, an innovative space washing machine designed to wash astronauts’ clothes in zero gravity and without water. The Wemit system could also be used later for other purposes such as washing clothes in hospitals or food factories. The Salesian Institute has already patented its project which was so impressive, the team dominated across the board coming first in the categories of scientific project, technological innovation, robotic programming, presentation and teamwork.

The winning students have been invited to compete for the prestigious Global Innovation Award which is held in California in June. This competition judges the 20 best scientific projects presented during the competitive season from around the world. The Salesian team previously made headlines in 2018 for qualifying for the World Championships in Detroit, Michigan with their “Idb Tech-No-Logic” project.

That winning project was focused on water filtration. The students from the Salesian team explained, “Seventy percent of the world’s drinking water is used to irrigate and comes mainly from the public aqueduct or wells. To reduce waste, we decided to take advantage of rainwater which would normally end up in sewers and recreate a series of structures commonly found in cities or near gardens with specific criteria to obtain the greatest possible capacity for water collection.”

The Salesian students highlight the importance of education to excite and inspire young people in scientific and technological subjects, using creative and unconventional methods.

“Salesian programs aim for innovation and help marginalized communities gain the education and resources they need to find, and even create, long-term employment that will help them break the cycle of poverty,” says Father Mark Hyde, director of Salesian Missions, the U.S. development arm of the Salesians of Don Bosco. “This and other science and technology projects and competitions help Salesian students to be competitive in the labor market or develop their own businesses to gain financial security.”