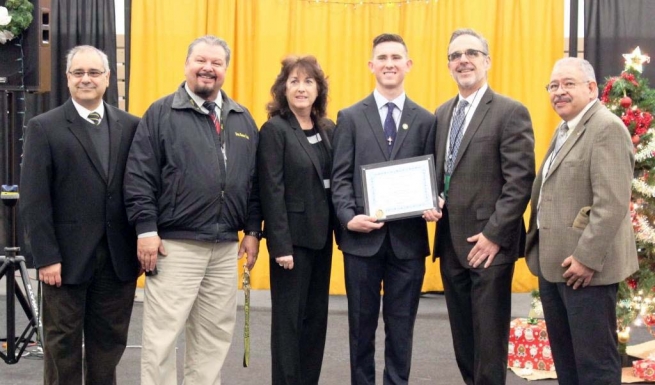 (MissionNewswire) Jacob Lovi, a senior at Don Bosco Technical Institute (Bosco Tech) high school in Rosemead, California, developed an idea during his summer internship at Boeing that will save the company significant money. According to an article in the Whittier Daily News, Boeing found that when it implements Lovi’s idea, it will save the company tens of thousands of dollars on every satellite, topping $1 million in savings within the next five to ten years.

Robert Stefan, Jr., Boeing’s test and evaluation division’s chief engineer, honored Lovi on Dec. 15 with a satellite coin (a traditional way in the field to reward “significant accomplishments”) along with a certificate of appreciation at a character assembly at Bosco Tech.

“He came up with these ideas and these changes are actually going to make our satellites significantly cheaper to build,” said Stefan in the Whittier Daily News article. “If you’re a five- to ten-year employee in our company, that’s great. If you’re a high school intern, that’s remarkable. Remarkable.”

According to the Whittier Daily News, Lovi’s ideas focused on a time-wasting setup within the company that specifically dealt with its storage and use of shims (a type of washer that’s used to build satellites). Lovi created a plan that would remove shims that weren’t necessary and reorganize the storage system, including associated storage documentation.

“We’re extremely proud of Jacob,” said Xavier Jimenez, president of Bosco Tech. “Not only does he epitomize the 21st century skills that are instilled in all Bosco Tech students — resourcefulness, problem solving strategies and technological competency — but he was able to use those skills to identify and clearly present to his internship mentor a new, more efficient approach to a complex process.”

Lovi’s ideas were not readily accepted at Boeing. He tried many times to persuade his supervisors and was told “no” more than once, but on Lovi’s second to last day, Stefan and his colleagues agreed to look into it. Another intern was able to put a plan into place for implementing Lovi’s ideas, which will be fully implemented in March, according to the news article. Lovi credits a combination of luck and persistence with the accomplishment.

“I realize that a lot of other interns put a lot of time into their work and did impressive work, too, on their summer internships at Boeing and other companies,” said Lovi to the Whittier Daily News. “In some ways I was lucky to get the right place at the right time, and because of my tenacious attitude and my willingness to keep pushing forward that really brought these ideas to light.”

Through Bosco Tech’s unique curriculum, students major in one of five STEM programs. Lovi is currently studying Materials Science, Engineering and Technology. After graduation, he plans to major in materials engineering at the university level. While in high school, he has served as junior and senior class president, YMCA camp counselor and a youth ministry leader at his church.

Celebrating its 62nd year, Bosco Tech is an all-male Catholic high school that combines a rigorous college-preparatory program with a technology-focused education. The school’s innovative STEM curriculum allows students to exceed university admission requirements while completing extensive integrated coursework in one of five applied science and engineering fields. Each year for the past several years, 100 percent of the graduating class has earned college acceptances.