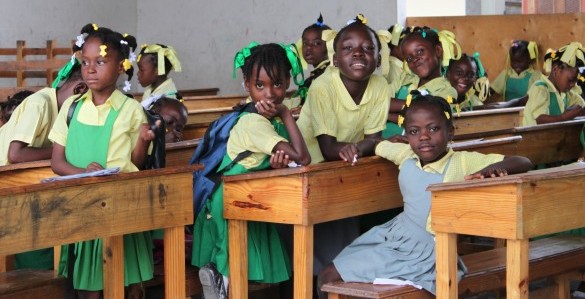 (UNICEF) PORT-AU-PRINCE, Haiti, 14 January 2013 – For the first time since 2005–2006, Haiti has updated data on the situation of children and women, enabling analysis of the earthquake response and helping establish where and who the most vulnerable children are.

The 2012 survey, known by its French acronym EMMUS, was commissioned by the Haitian Ministry of Public Health and Population and carried out by the Haitian Childhood Institute (IHE), which collected  data on infant mortality, disease and use of services in the country. UNICEF was a major financial contributor and resource provider, with support from the United States Agency for International Development (USAID), the United Nations Population Fund (UNFPA), the United Nations Development Program (UNDP) and the Canadian International Development Agency (CIDA).

According to Director of IHE Dr. Michel Cayemittes, “[The survey] enables us to determine the level of health and demographical indicators, allowing us to see the evolution of these indicators over time.”

Preliminary results of the survey bode well for the situation of children in Haiti, particularly in the areas of education and nutrition. Some of the most positive findings are in the area of education, which shows a 22 per cent growth in school attendance among children 6–11 years old over the period. Seventy-seven per cent of these children attended primary school in 2012, as compared to just under 50 per cent in 2005–2006.  An increase in school attendance among girls in Haiti has also been noted.

Situation after the earthquake

The survey allows an overview of the population affected by the 2010 earthquake, especially of the more than 300,000 people still displaced and living in camps, who remain among the most vulnerable population in the country.

According to Anne-Rose Saint-Preux, Nutrition Manager for UNICEF’s partner on the ground FONDEFH, the situation after the 2010 earthquake and the economic situation of parents were important factors in a considerable increase in the number of malnourished children.

Twenty-eight-year-old Vanessa saw malnourishment first hand. Having lost almost everything in the earthquake, she moved to camp Aviation, only to find her son Samuel malnourished. She brought the baby to a camp healthcare center run by FONDEFH, which provides pre- and postnatal care services, vaccinations and malnutrition screening.

Samuel was diagnosed as being acutely malnourished and placed on a treatment program that included a regimen of vitamin-enriched foods such as Plumpy’nut. He was monitored weekly for changes and developments. He responded to the treatment quickly and is now healthy and at a normal weight for his age.

The nutrition consultation and treatment program are supported by UNICEF, which provides materials, medicine and support to do the work on the ground.

The preliminary results of the 2012 survey, in comparison with the results from the 2005–2006 survey, show that efforts like these are working: Acute malnutrition in children under 5 years old has decreased by half – from 10 per cent to 5 per cent – and chronic malnutrition has also decreased – from 29 per cent to 22 per cent.

UNICEF Country Representative in Haiti Edouard Beigbeder says, “We were able, with the support of the international community, to bring services to the pre-earthquake level, but as well, to bring new results for the children of Haiti. The issue in the coming two years will be how to sustain these results.”

More to be done

While the survey points out where improvements have been made, it also highlights persistent bottlenecks, such as to quality of education, access to basic sanitation and reducing HIV infection.

Challenges still remain in Haiti, but for Vanessa, access to the resources and care at the UNICEF-supported FONDEFH clinic helped Samuel push through his period of malnutrition.

Ms. Saint-Preux says, “Unfortunately, I can’t say malnutrition has been completely eradicated here – hopefully one day I can. But, when I look back on where we started in 2010, compared to where we are now…thanks to the combination of prevention and treatment we are providing at the center with the support of organizations like UNICEF, I can say we’ve made great strides in decreasing malnutrition.”