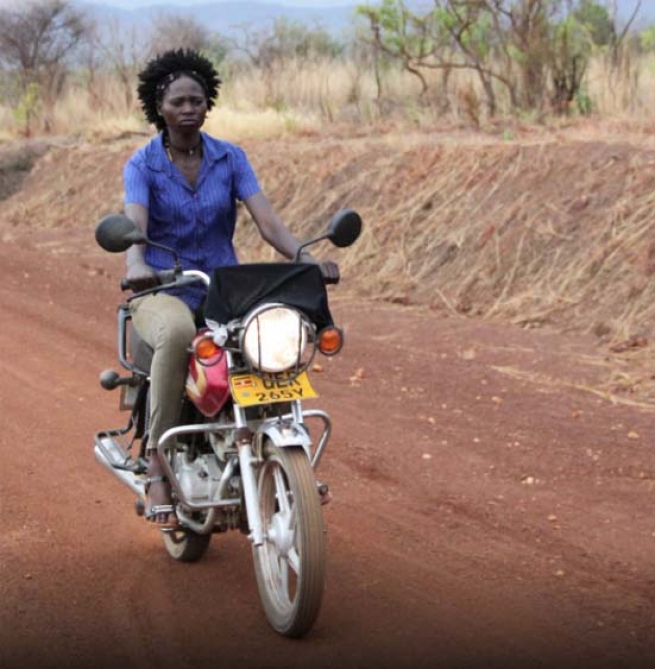 (MissionNewswire) Uganda has become home for more than 1.3 million refugees—82 percent of whom are women and children—in the wake of the ongoing conflict in South Sudan, according to the UNHCR, the United Nations refugee agency. Millions have fled the country and nearly 400,000 have died as a result of armed clashes. Many of those who have fled to Uganda have taken refuge at the Palabek Refugee Settlement in northern Uganda.

Here, Gladys, a 23-year-old mother, is attending course work at Don Bosco Technical School so she is able to learn the skills needed to repair the motorcycle she drives. Gladys is the only woman attending the motorcycle repair course. She attends the course while also working as a seamstress making small repairs on clothing with a sewing machine. Gladys says, “I don’t care that I’m the only girl. For me, it’s clear that I have to know how to repair the motorbike in case it breaks during the journey.”

As soon as she can, she plans to ride her motorcycle to South Sudan to visit her mother and son. Gladys fled from South Sudan when she understood that staying could mean being killed at any time, and her will to live overcame the fear of migration. She says, “One day they shot a bus full of people. I managed to throw myself to the ground and survived, but many people died.”

Gladys’ focus is on her son. “I want to give him a good education,” she says. She also hopes that one day it will be possible to have peace in her country. She adds, “We need peace in order to be able to think about the long-term future and to be able to continue smiling at life, without having to worry about how much time I will have to stay in a refugee settlement.”

Salesian missionaries at the settlement are offering much-needed psycho-social support and pastoral care for thousands of Christian residents. They also operate four nursery schools that educate more than 1,000 children. In addition, there are over 700 children attending Salesian primary and secondary schools and more than 700 families that are supported by various other initiatives.

Salesian missionaries launched the new vocational training center to offer life skills and other training to help young refugees prepare for employment. Thousands of refugees, representatives of non-governmental organizations and a government delegation participated in the opening ceremonies celebrating the center.

Young refugees are able to attend vocational training courses for free. Depending on the discipline, some courses will run for 3-6 months while others will run as long as a year. Salesian missionaries have also set up a job placement office which will help students make contact with companies that are hiring, prepare resumes and prep for interviews, and find internships and on-site training opportunities.

The vocational training center currently has 450 students, 400 of whom are refugees and 50 are host community Ugandans. The majority of students are young women and mothers who are finally having an opportunity to learn a skill. They are taking courses in tailoring, cosmetology and salon services such as hair dressing. Young men are learning automobile mechanics and motorcycle repair training. Agriculture classes are taught to all students no matter their primary area of study.

ANS ‒ Uganda – In the midst of terrifying statistics, a young mother – a biker – struggles to survive