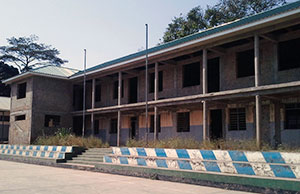 (MissionNewswire) Construction on a new wing for the Don Bosco Vocational Training Center Namaliga, located in the town of Bombo in central Uganda, was completed thanks to donors from Salesian Missions. The new wing consists of offices for 17 staff members and classrooms for 186 students and will allow for more job training courses in trades such as carpentry, plumbing and tailoring.

The training center already offers a number of courses in construction, electrical installation, electrical repair, electronics, hospitality, tourism, materials development and textiles. Because Salesian missionaries live in the communities in which they work, they are able to develop courses that give students the skills necessary to meet the demands of the local job market. The goal being to help each student transition out of the classroom directly into work.

“Salesian missionaries in Uganda work directly with poor and disadvantaged youth to provide hope for a positive future through education and training as well as sporting, recreational and cultural activities,” says Father Mark Hyde, director of Salesian Missions, the U.S. development arm of the Salesians of Don Bosco. “Salesian programs aim to provide youth with the technical education needed to find and retain long-term employment in order to help them break the cycle of poverty and contribute back to their families and communities.”

Since nearly 86 percent of the population of Uganda earns their income through farming, Salesian missionaries are providing agriculture training in addition to vocational and technical training in the country. The agriculture training is offered on six hectares of land on the grounds of the Don Bosco Children and Life Mission, located in the town of Namugongo, just 10 miles northeast of the city of Kampala in Central Uganda. The program provides agriculture education to 140 students who are encouraged to farm the land. Food grown through the program feeds the students and those living in surrounding communities.

Through the use of better farming techniques and better cultivation of the land, in 2015, the farm produced cabbage, carrots, onions, beans, corn, manioc, eggplant, peppers and sweet potatoes in abundance. The program has also expanded to include a piggery with three pigs, one of which produced eight piglets that are being raised on the farm. With a goal of eventually raising more than 200 pigs, Salesian missionaries have constructed an area to house a larger population of pigs and have installed water pipes to be used for cleaning and to provide drinking water for the animals.

The number of Ugandans living below the poverty line declined from 31.1 percent in 2006 to 19.7 percent in 2013, where it still stands today. While the country has seen some economic growth as well as improvement in its Human Development Index ranking over the last 20 years, it still ranks near the bottom at 163 out of 188 countries.

After decades of war left many displaced, the people of Uganda face many significant challenges as they work to rebuild their country. While 73 percent of Uganda’s population is literate, only 23 percent of Ugandans go on to acquire a secondary education, according to UNICEF. Salesian programs give Ugandan students a space for learning while also helping to meet their basic needs.