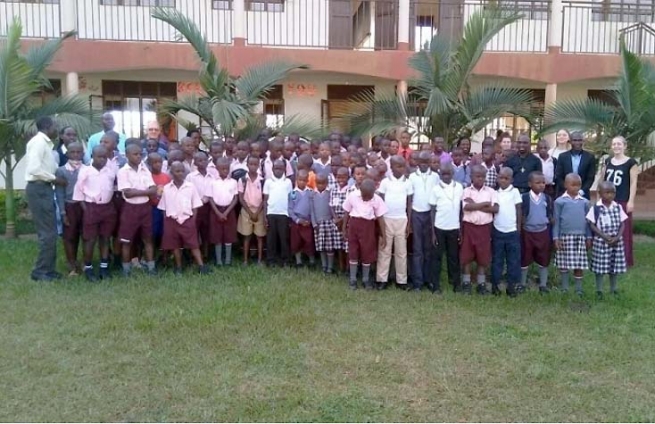 (MissionNewswire) Salesian missionaries have been operating the Don Bosco Children and Life Mission (CALM), located in the town of Namugongo just 10 miles northeast of the city of Kampala in Central Uganda since 2006. The organization, which was launched in 2001, was initially headed up by Comboni missionaries and a Jesuit priest before the Salesians were asked to operate the center.

Salesian missionaries have been actively engaged in improving the programs and services to better meet the needs of youth. Most recently, missionaries have been working to launch a primary school for youth in the region. The initiative was launched in 2015 by Salesian Brother Hubert Twagirayezu, who had asked the Salesian Mission office in Turin, Italy for financial support.

CALM currently hosts 155 children. Older youth, about 60 of them, attend the Salesian school in Bombo during the school year. The others attend the Don Bosco school in Namugongo together with 40 students who are not part of the CALM programming. The classes have between 10 and 25 children with two teachers, but more space is needed. While there are other schools in the area, those environments are not suitable for the needs of youth from the CALM program. In addition, the higher school fees prohibit many poor families from sending their children to them.

Phase one of the school project has now been completed. Salesian missionaries have fully painted a pre-existing building, purchased school desks, and completed construction of a technical and management support building. The work was also supported by local workers who were employed to help with the building, adding a further benefit to the local workforce.

Salesian missionaries also plan to launch phase two of the project, which includes building a new wing to the school complex. Once completed, families in the area and nearby villages can benefit from registering their children and have them attend.

Today, 34 million people live in Uganda, half are under 15 years of age. Many children and older youth have to deal with diseases such as malaria, respiratory infections, diarrhea and HIV/AIDS. CALM helps youth are often most in need. This new project will allow Salesian missionaries to ensure that students receive a quality education in their early years to lay the foundation for later schools and skills training.