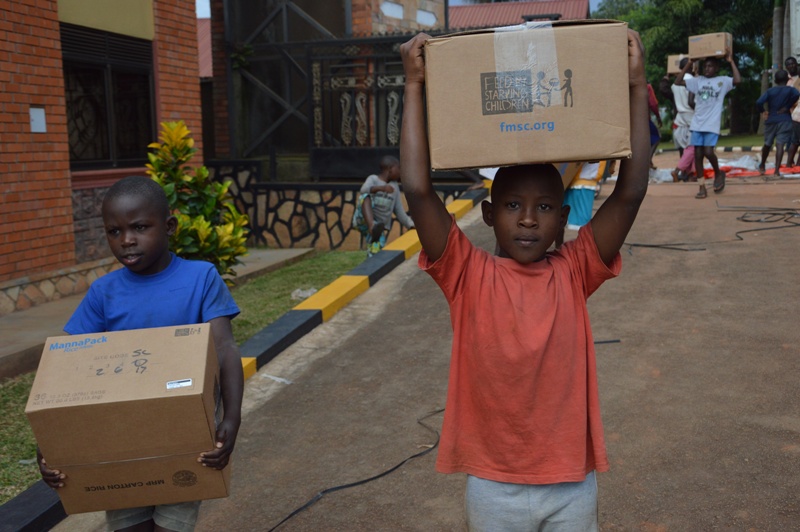 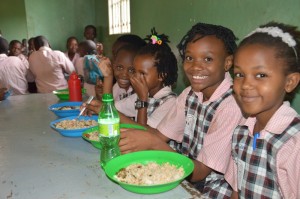 (MissionNewswire) Children attending the Salesian-run Don Bosco Children and Life Mission, located in the town of Namugongo just 10 miles northeast of the city of Kampala in Central Uganda, have access to better nutrition thanks to an ongoing partnership between Salesian Missions and Feed My Starving Children, a nonprofit Christian organization committed to “feeding God’s children hungry in body and spirit.” The donated meals are provided to students during the school day and serve as an incentive for families to send their children to school.

The Don Bosco Children and Life Mission provides more than 140 at-risk boys aged 6 to 18 access to primary, secondary and technical education along with sports programming, youth clubs, guidance counseling and life skills training. Students also have the opportunity to participate in a variety of extracurricular activities including jazz band, brass band, acrobatics and Youth Alive Uganda, an organization that works with youth to promote social skills and values.

“The rice is so nutritious for the children and so powerful,” says Father Elie Nyandwi, the director of Don Bosco Children and Life Mission. “When children come to school hungry, they are less likely to follow the instructions of their educators and improve their performance. Some of them are even tempted to escape and go to look for food outside and dodge their lessons. Now children remain in class and pay attention. The food is power and makes our mission successfully achievable.”

Because Salesian missionaries work and live in the communities they serve, they are also perfectly positioned to ensure that the distribution of food aid reaches those who need it most. They also offer programs that teach agricultural techniques to increase local food production. Through ongoing partnerships like the one with Feed My Starving Children, Salesian missionaries are able to deliver life-saving food aid and other supplies to those in need in their communities.

“Salesian missionaries are an integral part of the existing infrastructure in many countries and Salesian Missions plays an important role in making sure aid from the United States reaches its destination country and gets into the hands of those who need it most,” says Father Mark Hyde, executive director of Salesian Missions, the U.S. development arm of the Salesians of Don Bosco.

As a result of Salesian feeding programs, students are thriving. Many have gained weight, suffered fewer illnesses and become more focused on their studies. Teachers are seeing better student performance in class, a decrease in absenteeism and an increase in program enrollment rates.

Close to 67 percent of Ugandans are either poor or highly vulnerable to poverty, according to UNICEF. After decades of war left many displaced, the people of Uganda face many significant challenges as they work to rebuild their country. Uganda’s literacy rate has improved with 73 percent of the population literate but only 23 percent of Ugandans go on to acquire a secondary education. According to UNICEF, one of the biggest challenges in the country is combating the serious increase of HIV/AIDS that has left millions of children orphaned.