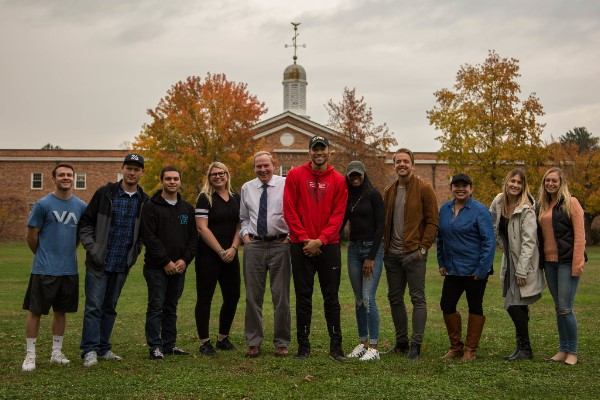 (MissionNewswire) In May 2017, two Long Island University (LIU) post-graduate students, Jake Murphy and Thomas Schoen, presented at an international marketing conference in Colombo, Sri Lanka’s capital city. During their trip, their group visited Don Bosco High School to better understand the socio-economic situation in the country. The Sri Lankan government has asked Salesian missionaries to teach agricultural and animal husbandry skills in institutions like the high school across the country.

“The idea of the government is to train these kids, many of whom are orphaned, in skills such as planting coconut and banana groves, and raising pigs,” said Murphy in a newsletter article posted by Don Bosco Charitable Foundation about the trip. “Once trained, these kids bring these skills back to their own villages. This is viewed as a way to break the cycle of poverty.”

While at the high school, Murphy and Schoen organized a basketball game with the students, and from that sprung an idea that U.S. college students could make an impact in the lives of Sri Lankan youth through sports. With the help of Frank Neary, an accountant, and Don Bosco Charitable Foundation, a nonprofit foundation registered in New York, Murphy and Thomas’ marketing class began to assist the cause.

Dr. Greg Sand’s class had previously relied on learning through case studies and computer simulation, but this fall, students have launched a full-spectrum marketing campaign for the foundation. “The concept of practical social media marketing and a promotional event seemed like a more concrete bridge to the world of work,” said Dr. Sand in the Don Bosco Charitable Foundation article.

To promote the foundation, students are becoming certified in Google Analytics and AdWords, communicate their message with MailChimp and note their research on Excel spreadsheets. Additionally, the group holds weekly briefings to go over the specifics it has accomplished and what the students plan to get done in the upcoming week.

“This is an innovative method of preparing students for real-life marketing applications across different industries,” said Dante Montovano in the article. Montovano is a marketing specialist at 7 Circle Media and former student at LIU, who helped develop the website for the foundation. He credits Dr. Sand for being progressive in his approach to the coursework.

“We have recently applied for a $10,000 grant from Google AdWords and plan to allow Dr. Sand’s class to manage it,” added Montovano. “This will be a major opportunity for students to experience managing a budget this size for Google AdWords.”

The marketing class also organized fundraising events every Wednesday during common hour in October. Participants were invited to the “3-for-$5 Kick-on-Goal Challenge” where they could donate $5 and have the opportunity to score three goals and win a Starbuck’s gift certificate.The class also collected new or gently used soccer balls to be donated to poor and orphaned youth in Sri Lanka. These promotional efforts have so far brought in 52 soccer balls and more than $1,000 in student donations to the cause. The article notes that in January 2018, the LIU graduates will volunteer to conduct soccer clinics at eight Sri Lankan Don Bosco high schools and will bring all the donated soccer balls to the youth. Money is also being raised to help make purchases for the agriculture program.

“Pigs are one of the most profitable animals to grow in Sri Lanka,” said Dr. Sand when explaining in the article how students could help the Sri Lankan students the most. “So, the donated money will go primarily to increasing the number of Don Bosco pigs from 500 to 1,000.”

Sri Lanka has suffered a long civil war that ended in 2009, two tsunamis in the past 13 years, and a worst-ever dengue crisis that killed nearly 300 people and infected more than 100,000 this year alone, according to NPR. Nine out of 10 poor people in Sri Lanka live in rural areas, according to the World Bank. More than 40 percent of the country’s rural poor are small-scale farmers with farm production often hampered by neglect and low investment levels resulting from poor financial services and limited technology. Sri Lankans are affected by a significant lack of infrastructure including roads, electricity, irrigation systems and communication channels. In several areas of the country, seven out of 10 people have no access to electricity and almost half of the population does not have access to safe drinking water. Malnutrition among children is also common.