Home / ANS  / THAILAND: Five graduates of the Salesian Nonthaburi Skills Development Center for the Blind are competing in the Paralympic Games of Asia

THAILAND: Five graduates of the Salesian Nonthaburi Skills Development Center for the Blind are competing in the Paralympic Games of Asia 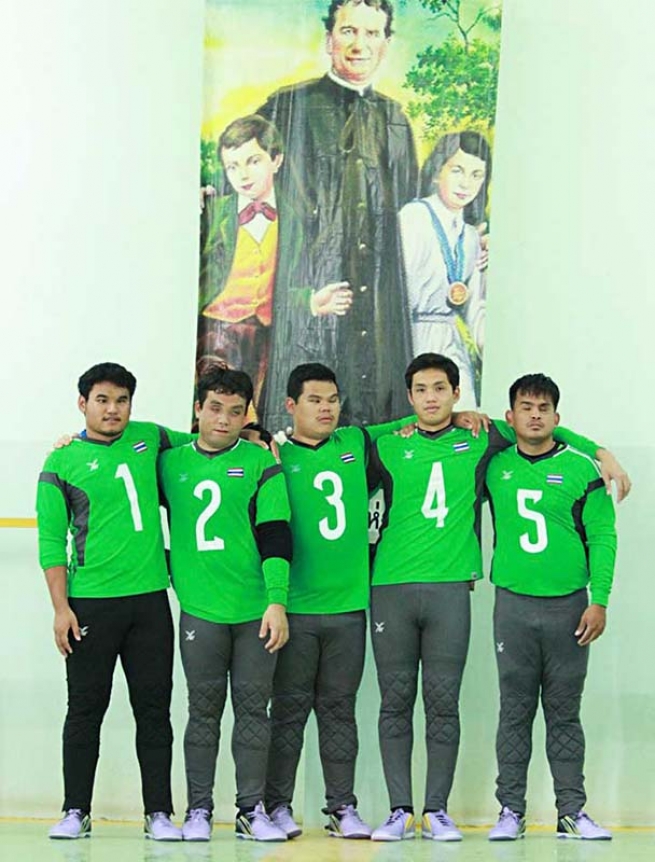 (MissionNewswire) Five graduates from the Salesian Nonthaburi Skills Development Center for the Blind in Thailand’s capital of Bangkok have formed a Thai Men’s Goalball team and are heading to the third edition of the Paralympic Games of Asia held in Indonesia in October 2018.

Goalball is a team game that can be played by athletes with visual impairments. The team spent weeks, from August until early October, training at the gym at the local Salesian center. Team members include Cholathee Sukchum, Pornchai Jadmee, Noppadon Poosrisoam, Booncha Fankamai and Sivarin Pornpirun.

Pornpirun is the spokesman for the group and just before leaving for the competition in Indonesia he spoke to the Social Communication Office of the Salesians of Thailand. He said, “For us Don Bosco is a father. We are all debtors of this center that has shaped us. Without this center and the Salesians who animate it, today we would not be ourselves, who we are. This center offers us the future, it also allows us with visual disabilities to live a dignified and quality life.”

The Nonthaburi Skills Development Center for the Blind was first established in 1978 by Italian missionary, Father Carlo Velardo. In 2009, the center was awarded the prestigious Van Thuân Solidarity and Development Award for its work.

Each year, 40 students with visual impairments embark on an intensive two-year educational program. When the program first started students were taught trade skills in carpentry and woodworking. Some students were able to find work but many others were denied employment because local employers feared workplace injuries and were put off by the higher costs of insuring visually impaired employees.

As a result, the program changed focus and in 1983 began training its students to be massage therapists. As an acknowledgement of the high-quality training offered and the program’s years of success, the Ministry of Public Health has begun to license graduates as doctors of Thai traditional massage. Most graduates are able to find work immediately and continue to hone their skills for many years. Through the program, the therapists-in-training see more than 150 clients each day.

One of the more marginalized groups in the country is people with disabilities. Men, women and children with disabilities have been cast aside and perceived as incapable of engaging in meaningful work and leading productive lives. Often those with disabilities, particularly those with visual impairments, are kept out of school and denied an education. As a result, their future employment prospects are diminished and the cycle of poverty continues.