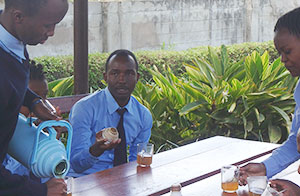 (MissionNewswire) Students at the Don Bosco Kilimanjaro International Institute for Telecommunications, Electronics and Computers, located in Arusha, Tanzania, have clean water access thanks to Salesian Missions donors. Through a Salesian Missions “Clean Water Initiative,” donors have provided the funding to drill a borehole and test water capacity, build a water tower and install a new water tank and supply and install a water purifying system.

The Don Bosco Kilimanjaro International Institute serves poor youth and young adults, many from local tribes. A sustainable source of clean water will enable students and staff to fight water-borne diseases, endure the dry season and cultivate the land for food.

Providing a source of technical training for Tanzania’s youth, the institute consists of a 15-acre campus that offers the most advanced training technologies in the region. Its innovative education model is based on a hands-on and student-centered approach to learning with full access to modern learning equipment simulating real world practical experiences. It is also registered and accredited by the National Council for Technical Education and awards successful graduates with a three-year National Technical Award Level Six diploma.

Like many poor nations around the world, Tanzania struggles to provide clean, safe water to its citizens. Nearly one-third of the country is arid to semi-arid and people not living near one of the three major lakes that border the country have difficulty accessing water. Ground water is the primary water supply throughout the country but wells are often few and far between. In many instances, wells are located near toxic drainage systems which leak into the fresh ground water and contaminate it. According to UNICEF, as a result of a lack of access to safe, clean water for drinking, cooking and bathing, water-borne illnesses such as malaria and cholera account for close to half of the diseases affecting the population.

“From safe drinking water and healthy sanitation to agriculture, water is essential for life,” says Father Mark Hyde, director of Salesian Missions, the U.S. development arm of the Salesians of Don Bosco. “This water project in Tanzania, and others around the globe, ensure Salesian centers have the water they need so staff and students can work and learn in a healthy environment.”