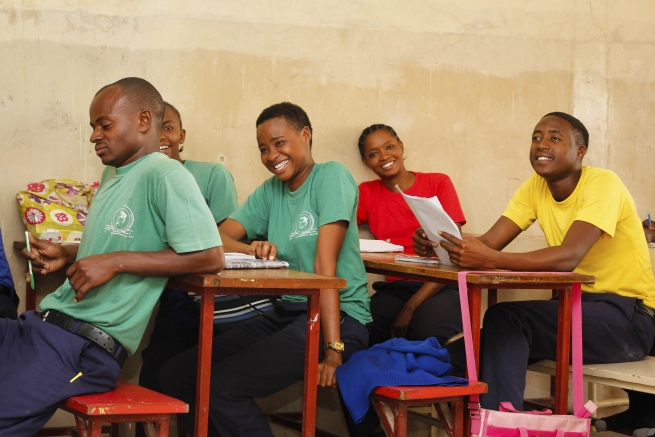 (MissionNewswire) Salesian vocational schools in Tanzania having been working to promote education for young women who are often left out of these advanced educational opportunities. Originally designed to provide training only for boys, Tanzanian vocational schools now have girls as 38 percent of the student population, while in 2015 they were only 11 percent.

It was necessary for Salesian vocational schools in Tanzania to open to girls for many reasons. When young women have access to education, they are able to have social justice, avoid early marriages, and support the growth and development of the country. This is important as a strong economy requires a greater number of qualified people.

Yet, this change has not been easy to achieve because vocational training for so long was considered a male stronghold. In Tanzania, change did not come by itself. Salesian schools have organized a series of initiatives to encourage girls to enroll in technical and vocational schools. The “Binti Thamani” campaign (literally “precious girl”) works to make students, teachers and parents aware of equal opportunities for boys and girls in education, including technical training and work.

Many girls and their parents did not know that girls could attend vocational training courses. The campaign has reached 3,000 girls and is still reaching girls today. The number of girls attending Salesian schools continues to grow steadily year after year.

Grace is a young 21-year-old Tanzanian woman. She is the daughter of farmers, who was born into a large family. She would wake up every day at three in the morning to prepare simple dishes to sell in a kiosk along the street. Because she worked, she could not complete her high school education. After a meeting with a nun, she decided to enroll in an electro-technical course at a Salesian vocational training school. Grace’s story illustrates how important Tanzania schools are for gender equality.

“When I resumed my studies in 2016, I felt happy again,” says Grace. “Every day I learned something new. I also did a two-month internship in a company. Not everything was easy there.  There were linguistic difficulties, and I was also the only girl. Sometimes I did not feel comfortable, but I wanted to continue. Many people think that only boys can become electricians. But I was happy to disappoint them. My tutor told me I’m the best in my class. And this encourages me to make my dream come true.”

Just over 67 percent of the population lives below the poverty line in Tanzania, according to UNICEF. While the country has seen some economic growth in tourism, mining, trade and communication, the number of Tanzanians living below the poverty line has marginally increased due to rapid population growth. In some regions, up to half of the population struggles to meet the cost of essential food and shelter and other basic necessities like clothing, healthcare and education.

Children suffer the greatest in the country, with almost 70 percent facing deprivation in two or more of the areas of health, nutrition, sanitation, education, access to information, water supply and shelter. Roughly 42 percent of children under the age of five in Tanzania suffer from chronic malnutrition, while 16 percent are underweight. UNICEF notes that levels of deprivation among youth living in rural areas is up to three times higher than those of urban youth. In addition, many of the nearly one million children orphaned due to the AIDS epidemic are forced to leave school due to poverty or to care for their families.