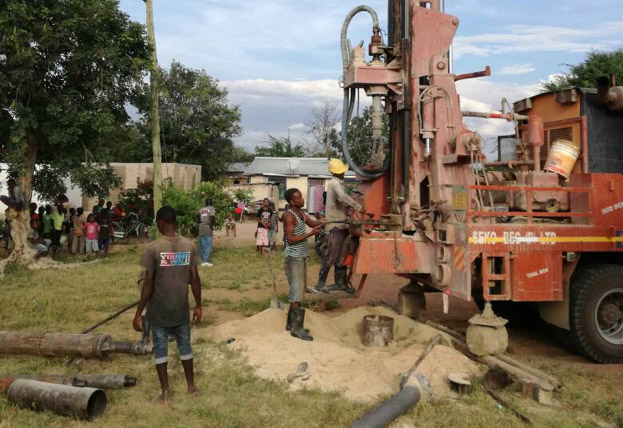 (MissionNewswire) Thanks to funding through a Salesian Missions “Clean Water Initiative,” 499 Salesian missionaries and parishioners from Don Bosco Ihumwa Parish and more than 4,120 community members in Ihumwa Village have access to clean, safe water. In Dodoma, the capital city of Tanzania where the Don Bosco Parish is located, the water system is old and outdated. Water pipes were last installed there in July of 1998 and due to rapid growth and expansion in the city, the water supply is no longer sufficient.

Dodoma is expected to see a rise in population to more than a million people by the year 2020. The old distribution pipelines totaling 50km around the city are in need of rehabilitation. Currently, there are limited resources for expanding clean water and sewerage networks. This unsteady supply of water has led to an increase in disease and conflict, especially during dry seasons. During the rainy season, communities use untreated surface rain water for drinking.

The lack of safe drinking water, coupled with poor solid waste management, sanitary conditions and personal hygiene continued to pose health risks for most households in the region. Further, waterborne diseases also posed a significant risk in the area due to the same aforementioned conditions.

The current water system can only reach about 44 percent of the population in the region. There is still much to be done to provide potable and adequate water for all households within a 400 meter radius. In response to this overwhelming need, Salesian missionaries at Don Bosco Ihumwa sought to dig bore holes for the parish and the surrounding residents to supplement the inadequate municipal water supplied at the institution.

Funding supported digging a bore hole in the Salesian parish compound and constructing reservoir tanks and piping within the parish areas. The project also entailed installing solar panels to power the submersible pump.

The completion of the water project has not only brought clean, safe water to the parish and surrounding communities but with the increased access to safe and easily accessible water, various other initiatives in the community are underway. Residents have been able to use the water for food preparation, hand washing and safe hygiene practices, laundry, cleaning, and kitchen and garden activities in the targeted area.

“Having access to clean water is essential for the health and safety of those Salesian missionaries serve around the globe,” says Father Mark Hyde, director of Salesian Missions, the U.S. development arm of the Salesians of Don Bosco. “Improving water and sanitation facilities brings a sense of dignity for the children and families accessing Salesian programs and in surrounding communities. It also ensures that youth are able to remain in school and stay focused instead of missing class time to be in search of water for their families.”

UN-Water estimates that 2.1 billion people worldwide lack access to safely managed drinking water services and by 2050, the world’s population will have grown by an estimated 2 billion people, pushing global water demand up 30 percent higher than today. UN-Water also indicates that around 1.9 billion people live in potentially severely water-scarce areas. By 2050, this could increase to around 3 billion people.

UN-Water highlights nature-based solutions that have the potential to solve many of the globe’s water challenges. It suggests doing more with “green” infrastructure, harmonizing it with “grey” infrastructure wherever possible. Planting new forests, reconnecting rivers to floodplains and restoring wetlands will rebalance the water cycle and improve human health and livelihoods.

In response to this crisis, Salesian Missions has continued its “Clean Water Initiative” making building wells and supplying fresh, clean water a top priority for every community in every country in which Salesian missionaries work.