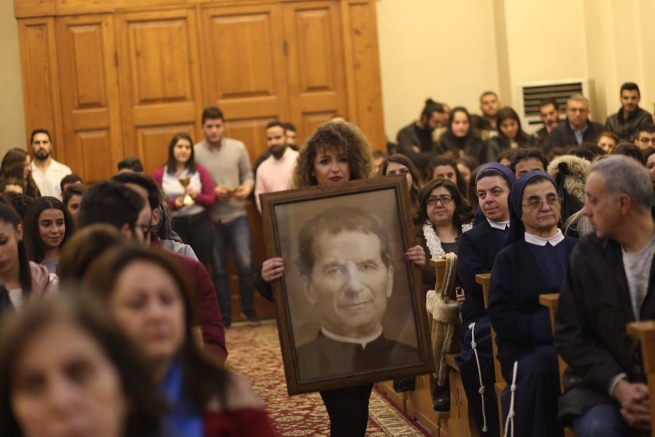 (MissionNewswire) Thanks to support from the Salesian Rector Major, Father Ángel Fernández Artime, Salesian missionaries in Syria’s capital city of Damascus have been able to buy a plot of land on the outskirts of the city to build a new Don Bosco Center. The goal is to create a new space for youth to connect with their peers and with Salesian missionaries who are working to provide social development and educational programs.

The plot of land is located near Jaramana, a suburb of Damascus where the majority of the population is Christian. It is also just one kilometer from Imbleha, a small satellite city totally destroyed by the recent war. The announcement of the purchase of the land was made at the end of the Catholic Mass celebrated Sunday, Feb. 3 at the church of the Salesian house in Damascus. Father Munir Hanachi, director of the house, read an official statement sent by the Provincial of the Middle East, Father Alejandro León.

Part of the statement read, “After much dreaming of how to develop the Salesian work in Damascus, with the great effort of the current community, the Rector Major decided to buy a piece of land between Imbleha and Jaramana to slowly build a Don Bosco Center that is larger and closer to many children and young people living in Jaramana. We have already bought this land. Now a few years will pass and slowly the new center will be built, but the important thing is to feel from now on that this new structure is home to everyone. And we must all help ourselves so that the realization of this dream takes place in the best possible way.”

“At the beginning of the war, we were forced to close the center in Aleppo for six months,” says Father Pier Jabloyan, director of the Salesian center in Aleppo. “When we realized that the conflict would last a long time, we decided to reopen. There was no other way. Staying closed up in their houses, it would have been incredibly difficult for the children.”

Salesian centers in Syria also continue to meet the needs of their communities through the distribution of food, economic aid and scholarships to help young people continue with their schooling.

In addition to Salesian centers within Syria, Salesian missionaries have been helping Syrian refugees in Turkey, Lebanon and Egypt since early 2012. At these refugee sites, missionaries provide emergency relief by meeting basic needs and providing shelter, safety and medical assistance. Missionaries also offer technical skills training to assist refugees in the task of finding stable employment in their new host countries, which for many is particularly challenging due to labor laws and a lack of established social and professional networks.