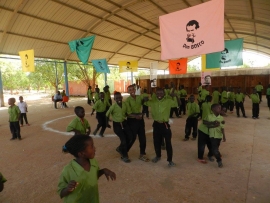 (MissionNewswire) Salesian missionaries at the Don Bosco Technical School in El Obeid, the capital city of the state of North Kordofan in southern Sudan, have been providing social development services and educational opportunities to poor youth since 2001. Since the technical school’s inception, thousands of youth have received education, employment training and workforce development services.

The school has been doing so well that it was the recent site of important government visits. In March 2017, the Queen of Qatar, Sheikha Mozah bint Nasser, visited the school. In December 2016, several members of the Sudan State Legislative Assembly visited it and in November 2016, the school hosted visits from officials with UNICEF and the Ministry of Education. All of the visits were in recognition of the exceptional vocational training students receive at the Salesian school.

Currently, the school has 220 students and issues recognized certificates in several three-year courses including general mechanics, auto-mechanics, welding, plumbing, carpentry, construction and electrical engineering. Career counseling and job placement services help students make the transition from the classroom into the workforce with more than 75 percent of graduates finding employment in their chosen field. Many students who attend the technical school are escaping the violence of a civil war that has torn apart South Sudan and disrupted its education system.

In addition, the school runs a primary school focused on literacy, which was started in 2005. Today, there are 242 children in the program. UNICEF in El Obeid supplies all the school materials for the literacy program, and the United Nations World Food Program supplies the food to feed the students one meal a day while at school.

From 2004 through December 2015, the school also ran a program bringing boys from Darfur to the school for an intensive 10-month training program in various technical trades. More than 5,000 students graduated from this program while in operation. The project aimed to educate poor youth but also helped them to unify. There had been much fighting in Darfur among local tribes but bringing the boys to the Don Bosco campus meant they had to learn and live together. This helped them go back united and bring a sense of peace to their communities.

“The Don Bosco Technical School is well known in the North Kordofan State and employers know that students from the school excel in their employment,” says Father Dominic P.D., director of the school. “Salesian programs are able to meet the diverse needs of students, allowing them to focus on their studies while gaining life skills that help them make better decisions and find future employment.”

With more than 46 percent of its population living in poverty, the Sudan is one of the poorest countries in the world, according to UNICEF. Low incomes and food deficiencies are commonplace and ongoing violence and civil unrest exacerbate already harsh conditions. Despite these challenges, more youth are in school today than ever before with school attendance up to 73 percent compared to 68 percent in 2008. There remain, however, some 3.2 million children between the ages of 6 and 16 out of school with the highest rates among nomadic populations, those living in rural areas and in the poorest households.

School enrollment and retention is affected by weak curriculums in Sudanese schools and inadequate educational materials and teacher training (according to UNICEF, more than 40 percent of teachers are untrained). Ongoing conflict and the high cost of education, particularly in rural areas where parents have to pay school fees, also affect enrollment rates.