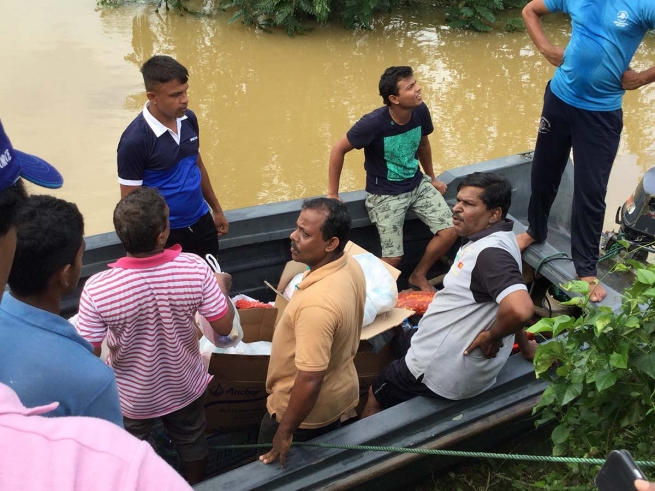 (MissionNewswire) Sri Lanka’s southwest monsoon season, which runs from May to September, has brought unusually heavy rains even for the season. The most recent rains at the end of May caused major floods and landslides. Salesian missionaries living and working in the region report that the local Disaster Management Center has reported 202 deaths and 96 people missing. More than 77,000 people have been displaced and more than 1,500 homes destroyed. A Salesian House was also affected with its perimeter wall collapsing.

Due to torrential monsoon rains, water levels of five rivers—Kalu, Kelani, Gin, Nilwala and Attanagalu Oya—rose submerging vast expanses of land and causing significant damage. The flooding brought by the rains, which started May 25, is believed to be the island’s worst flooding in 14 years. Salesian missionaries in Sri Lanka set up its own Disaster Mitigation and Relief Unit in its provincial house due to the threat to the country from torrential rain, cyclones, floods, landslides, heat waves and droughts, which have been occurring on a more frequent basis.

“Because Salesian missionaries are living in the communities where they are providing education, workforce development and social development services, they are perfectly positioned to respond in times of crisis,” says Father Mark Hyde, executive director of Salesian Missions, the U.S. development arm of the Salesians of Don Bosco. “The new unit developed with the Salesian program allows missionaries to be well-equipped for disaster preparedness to effectively mitigate foreseeable and predictable disasters, coordinate relief work, and help with post-disaster resettlement, if needed.”

Salesian missionaries are currently helping families affected by the most recent flooding and landslides. They are in urgent need of dry rations such as rice, dhal, bottled water, tea leaves, milk powder, baby food, canned food and ready-to-eat packaged food such as biscuits, bread and jam. They are also in need of hygiene items such as soap, toothbrushes, sanitary goods, bed sheets and clothing. Other nonprofit partners who work in collaboration with Salesian missionaries in Sri Lanka, like the Conference of Major Religious Superiors, have also turned to the missionaries for assistance.

The local Don Bosco Center is also providing the support of its students in the electrical, plumbing, welding and civil engineering programs to help repair homes and rebuild those that can’t be salvaged. This both allows students to put their skills to work in the field and helps support families in need.

“We are hoping that anyone that can help us in this time of crisis will so that we are able to provide assistance for as many families in need as possible,” says Father Joseph Almeida, provincial of Sri Lanka. “Many people in the area have suffered a terrible loss with their homes and personal possessions destroyed. Salesian missionaries are here to help with the immediate relief and help them rebuild their homes and lives.”

Nine out of 10 poor people in Sri Lanka live in rural areas, according to the World Bank. More than 40 percent of the country’s rural poor are small-scale farmers with farm production often hampered by neglect and low investment levels resulting from poor financial services and limited technology. Sri Lankans are affected by a significant lack of infrastructure including roads, electricity, irrigation systems and communication channels. In several areas of the country, seven out of 10 people have no access to electricity and almost half of the population does not have access to safe drinking water. Malnutrition among children is also common.