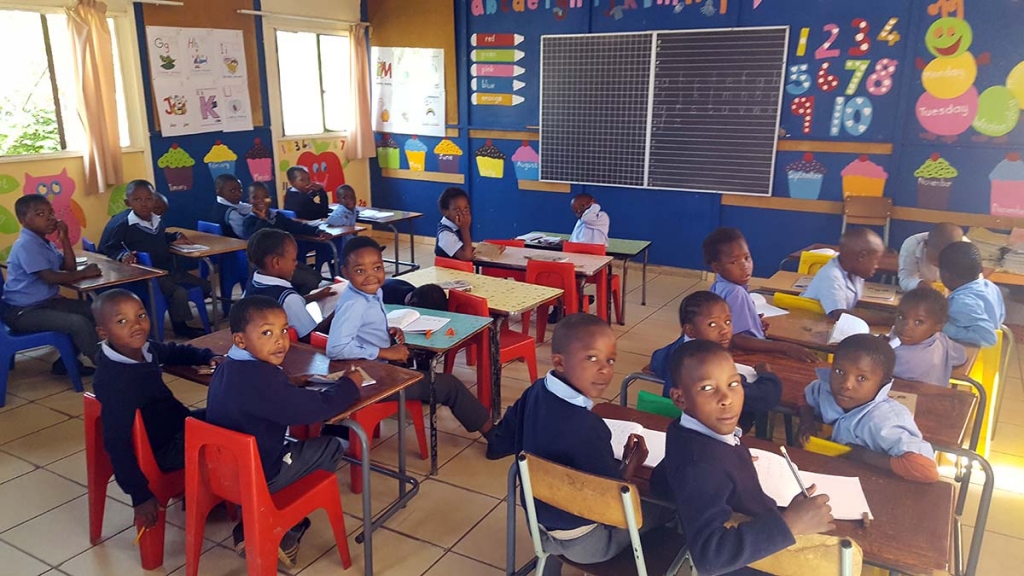 (MissionNewswire) Sister Helen Hartnett, with the Salesian Sisters of Daughter of Mary Help of Christians, facilitates an assistance program for families with children who have recently settled in the new settlements on the outskirts of Johannesburg, South Africa. The children who participate in the program come from extremely poor families and attend educational lessons up to the third grade. They also receive a daily meal while at school.

Since the ground is not suitable for the construction of buildings, containers have been set up as classrooms, a cafeteria and bathrooms. This work was mostly made possible through donations from local Hindu and Muslim groups, which also provide students with uniforms, books and food. The locals themselves police over the structure, keeping it safe from theft, vandalism and violence.

The center was 12 years in the making and combined separate programs run by the two organizations, one a skills training program and the other a school. The goal was to create one center offering both services to greater benefit the local youth. Through the assistance of donors helping to establish the center, a plot of land was acquired and a number of new buildings erected.

Even before they were completed they were occupied by children and older youth anxious to attend school or learn a trade. Don Bosco Center offers courses in hydraulics, carpentry, bricklaying, plastering, computers and electronics. Today, there are 200 children attending the school and 60 young people enrolled in the various professional courses. Another 60 youth are attending classes to complete their secondary schooling.

“Because Salesian missionaries live within the communities they serve, they see the local need and are able to develop programs to meet that need,” says Father Mark Hyde, executive director of Salesian Missions, the U.S. development arm of the Salesians of Don Bosco. “Education is the greatest tool in combating poverty and the collaboration of the two communities will strengthen and enhance the ability to help youth achieve educational success and break the cycle of poverty.”

Poverty is extensive in South Africa with more than 45 percent of the population and more than 63 percent of children living below the poverty line, according to UNICEF. A significant percentage of the population struggles to survive on less than $1 a day. The country is plagued by high crime rates and violence against women and girls. It has been the hardest hit by the HIV/AIDS crisis in the world. There is an urgent need for education to help prevent the spread of the deadly virus and to help lift youth out of poverty.