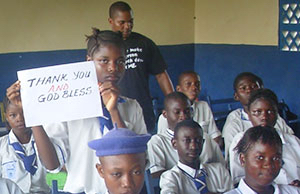 (MissionNewswire) Donor funding through Salesian Missions is providing the necessary capital for musical instruments for a new school band at St. Augustine’s Agricultural Secondary School in Lungi, Sierra Leone. The project will provide an extra-curricular program in music and entertainment that will bring relief and healing from the trauma that persists in the post-Ebola, post-civil war climate in the country.

Sierra Leone, Liberia and Guinea were hard hit by the Ebola crisis that started in 2014. The World Health Organization (WHO) has reported that there were more than 14,122 total cases of Ebola and 3,955 deaths from the virus in Sierra Leone alone. During the Ebola outbreak, Salesian programs, particularly those operated out of Don Bosco Fambul in Freetown, mobilized staff and immediately began providing information about the prevention of Ebola. Salesian missionaries worked with local communities to provide food aid and education about Ebola while disseminating protective clothing including long-sleeve shirts and cleaning and disinfecting agents such as chlorine.

Sierra Leone is also still recovering from a brutal 10-year civil war. More than 500,000 people were displaced and more than 60,000 children were orphaned and left homeless. Girls and young women are especially vulnerable in Sierra Leone. Close to 200,000 young girls and older women were sexually assaulted during Sierra Leone’s civil war, according to aid agencies.

Salesian missionaries have been living in Sierra Leone since 2001 when they began working to rehabilitate former child soldiers. Young people in particular face significant challenges in accessing education in the country. There are too few teachers and many school buildings were destroyed in the war. Persistently high illiteracy rates mean that an estimated 70 percent of Sierra Leone’s youth are un- or under-employed.

In recent years, Salesian missionaries in Sierra Leone have not only been reaching out to at-risk youth and providing educational opportunities, they have also been responding to local urgent needs. The school band is an opportunity to provide youth an educational and social outlet. In Angola, Salesian missionaries have already launched a school band that is highly successful. The Don Bosco Band, based in Lixeira, one of the poorest areas within the capital city of Luanda, is made up of youth who attend Salesian schools in towns and villages in and around Luanda.

Organized band activities have replaced idle time when students would browse the internet or loiter in markets or on the streets with little to do. The band brings much needed structure to the students’ lives as well as teaching valuable concepts like teamwork and collaboration. Participants become an integral part of the band’s larger community and find purpose in working together toward a common goal. The band has more than 95 instruments available. Students are able to choose the instrument they are most interested in and receive lessons, play the instrument in recitals and other events and build relationships with like-minded peers.

Another successful youth band is the Don Bosco Band launched by Salesian missionaries at the Don Bosco Children and Life Mission in Central Uganda. Music lessons began at the school nine years ago when Salesian missionaries introduced a new initiative teaching a small group of students to play the trumpet. Many of the children attending the primary school wanted to learn and enrolled in the program. Soon a small class grew to more than 50 students.

The music program was so successful that the number of musicians and trumpets increased until they were able to form a school band. Initially, the music program was held only on Sundays and lasted two hours. Some of the enrolled children enjoyed the program so much that they started to teach their friends the best way to play the trumpet. By the end of the school year, so many students were learning that they were able to take part in a concert alongside older and more experienced students.

“The Don Bosco Children and Life Mission and all Salesian programs are constantly looking to improve themselves to offer students more diverse programming to help them discover and expand their talents,” says Father Mark Hyde, director of Salesian Missions, the U.S. development arm of the Salesians of Don Bosco. “We appreciate our donors who have helped ensure students in Sierra Leone have these opportunities.”