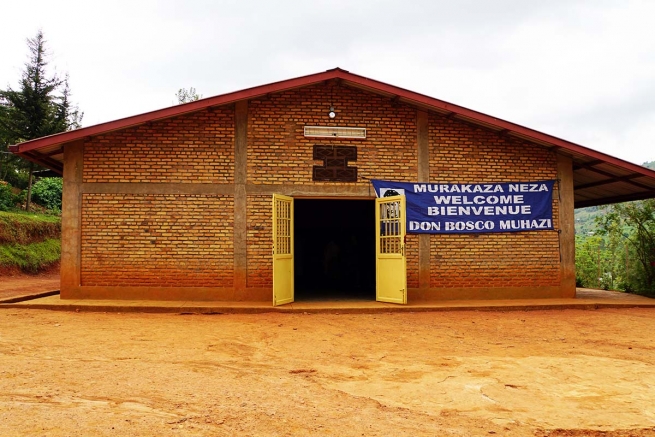 (MissionNewswire) Salesian missionaries in the small village of Muhazi, near the Rwandan capital city of Kigali, operate a vocational center that provides education and training in dressmaking, construction, and catering. Students also learn to cook, take care of a home and organize events. In Kigali, which is surrounded by a range of mountains and luxuriant valleys, many of the inhabitants never went to school, or they dropped out when they were attending primary school. Because of this, many residents never had the opportunity to gain an education or the skills for stable employment.

Salesian missionaries began their work in Rwanda offering programs to combat poverty through education, skills training and workforce development services as well as meeting basic needs like shelter and feeding programs. Many initial educational programs just focused on teaching how to read and write but as the surrounding community became more interested in learning vocational and trade skills and preparing for the workforce, programs expanded to cover other subjects and incorporate skills training that would lead to long-term employment.

“Students in Rwanda are taking the first steps to rebuild their lives and their country,” says Father Mark Hyde, executive director of Salesian Missions, the U.S. development arm of the Salesians of Don Bosco. “Learning skills in the latest technologies and other fields, students are able to find jobs in high growth sectors that help them support themselves and their families.”

Recently, the Salesian Missionary Procure of Warsaw, Poland, began collecting funding to build new bathrooms and showers for the vocational school in Muhazi. The goal is to build on to the school to provide students with the clean, fresh water and appropriate sanitation needed.

Rwanda has made remarkable progress since the 1994 genocide in the country, particularly in providing education and health services to the poor, according to UNICEF. However, with high rates of poverty, there is still much to be done. Close to 57 percent of the country’s population of 10 million live below the poverty line and for those under the age of 18, the poverty rate increases to more than 60 percent. UNICEF notes that subsistence farmers, households headed by youth and those without assets and adequate household resources remain the poorest and the most vulnerable to worsening poverty and the effects of natural disasters, food insecurity and economic crises.

With half of Rwanda’s population under the age of 18, lack of educational opportunities is a concern. Half of all children who enroll in primary school don’t finish and go on to face a future of unemployment or employment at low-paying jobs. In addition, almost four percent of children aged five to 14 are working in domestic service or other jobs instead of going to school.