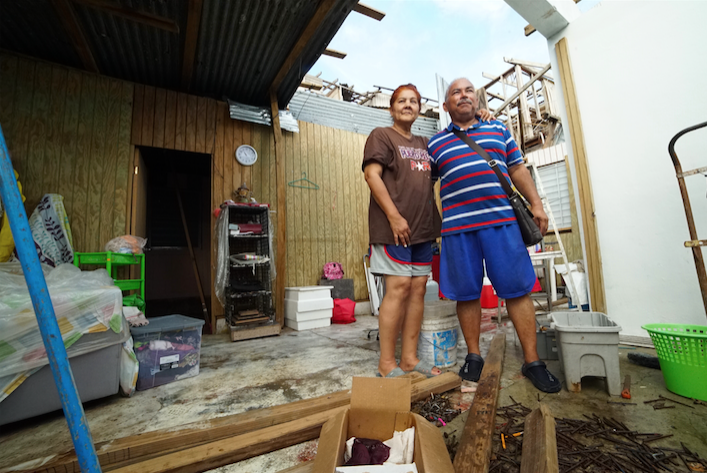 (MissionNewswire) Salesian missionaries continue to respond to critical needs of victims of Hurricane Maria, which devastated communities across Puerto Rico in September 2017. To aid these ongoing relief and reconstruction efforts, Salesian Missions, the U.S. development arm of the Salesians of Don Bosco, has launched a new fundraising campaign to help aid this work.

While the official death toll is listed at 64, unofficial accounts have it significantly higher at more than a thousand. Puerto Rico has had homes, schools and other buildings destroyed. The hurricane dismantled the island’s electricity and communications system and cut off more than 3 million men, women and children from crucial humanitarian assistance. Residents were cut off without food, water, electricity or shelter from the harsh weather conditions.

More than six month later, the rest of the world has moved on to the latest news, but Puerto Rico is still struggling with the aftermath of this monstrous storm. Children and families live in roofless, severely water-damaged homes with exposed power lines, crumbling walls and empty food pantries. They stand in long lines waiting to purchase food, water and other basic necessities, with no guarantee of getting what they need. Nearly 200,000 people are still without electricity, unable to heat or cool their homes, store food properly or accomplish day-to-day tasks.

“If there’s a way to help, we’ll always find it,” says Sister Magna Martinez, a Salesian missionary serving at Colegio Maria Auxiliadore (Mary Help of Christians) in San Juan. Sr. Martinez and her colleagues remain passionately committed to helping the countless families who lost everything in the storm. Her words reflect the Salesians’ faith and tenacity, even as official relief efforts fall significantly short in meeting the ongoing and widespread need.

Back in September, immediately after the storm’s danger had passed, Sr. Martinez and her colleagues ventured into the streets of San Juan to assess damage and minister to victims. “When we saw their homes, our hearts were crushed,” recalls Sr. Martinez. “We didn’t have much to offer but realized: We have the school. We have the cafeteria. We can clean it all out and host as many people as we can.”

In those initial, chaotic days, Maria Auxiliadore filled with children and families with nowhere else to go. A similar scene played out across the island. Salesian missionaries opened their doors to both victims who needed help and to organizations seeking a central, trusted location to distribute it. In the community of Cantera, for example, volunteers from the Salesian youth center accompanied Father Carlos Piantini into the streets, visiting 500 families whose homes had been destroyed and delivering what small items of relief they had on hand.

“According to residents, Fr. Piantini and his volunteers were the first people to show up,” says Franklin Ortega, executive director of the Don Bosco Salesian Foundation, who toured Puerto Rico with Father Francisco Batista, provincial of the Antilles region, after the hurricane.

In Orocovis, Ortega reports missionaries lent space to the Department of Family Services, whose building was destroyed by the storm. From these new headquarters, officials were able to assist local residents (as many as 4,000 of whom desperately needed emergency shelter). And in Aguadilla, Sr. Maritza Ortiz and her fellow missionaries from Casa Juan Bosco fanned into the surrounding neighborhoods, checking on residents—especially the elderly and those who lived alone.

That help remains crucial, even now. Sisters Martinez and Ortiz continue to provide food, clothing, small household items and even mattresses to those who have yet to recover from Maria’s damage.

Karla, for example, is a mother of two whose family still lives in a home that would likely be condemned on the mainland. Yesenia struggles to meet basic needs for herself and her young son Jordan, who remains traumatized by the storm. And Doris suffers from a respiratory illness that requires supplemental oxygen—something she can’t always use, because electricity to her home is sporadic. Today, all three women persevere, in part, because of Salesian missionaries.

Although they are not students at the school, Karla’s children have found respite at Maria Auxiliadore while their mother works to rebuild. There, they enjoy meals, clothes and relief from worry as they play games with their peers. Missionaries have released videos of their ongoing work on the island.

Far too many residents still struggle to restore a sense of normalcy to their lives, which has been challenged by the absence of adequate assistance. Officials estimate that it will take billions of dollars, and perhaps decades of effort, to rebuild Puerto Rico’s infrastructure and economy. And it’s difficult to see where the money will come from, when traditional means of income—agriculture, tourism and manufacturing—have been crippled, if not completely destroyed. For this reason, missionaries also hope to leverage their local relationships in order to connect families with the resources they need, including financial assistance for purchasing materials to reconstruct their homes.

In response to the overwhelming need, Salesian Missions has launched its Puerto Rico Fund. Those who want to support these efforts are urged to make a donation online at salesianmissions.org/prhurricane.

ANS – Puerto Rico – The worst was not the hurricane, but the floods, the destruction and the lack of communications

USA Today – 6 months after Hurricane Maria, life in Puerto Rico is better — but will ‘never be normal again’