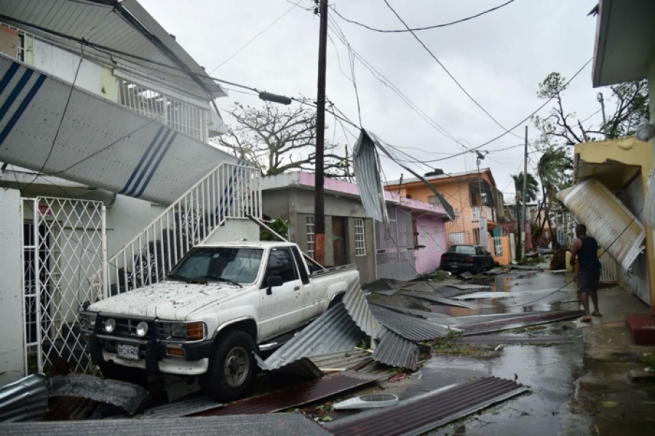 (MissionNewswire) Hurricane Maria devastated the island of Puerto Rico, killing at least 10 people and leaving almost all of the island without power and communications, according to CNN news reports. Puerto Rico, with a population of more than 3.4 million, has had homes, schools and buildings destroyed, roads completely washed away and others blocked with debris, and a loss of cellphone service, water and power. Government officials fear without water and power that a dire humanitarian crisis looms. It’s been reported that it can take up to six months to restore these services to parts of the island.

Residents are isolated, and even government officials and first responders are cut off from the outside world and struggling to assess the full scope of destruction to the island. CNN reports that the Puerto Rico Federal Affairs Administration has confirmed that 4,000 members of the U.S. Army Reserves have been deployed to the island to help with Hurricane Maria recovery.

Salesian missionaries have six Salesian communities in Puerto Rick including two in San Juan and one in the communities of Catano, Aíbonito, Aguadilla and Orocovis. Salesian sisters are also working in the communities of Aguadilla, Orocovis and Santurce. Salesian missionaries are reporting that all communities have been affected. Information is challenging to get but what is known is that there are damages, including roof and water damage, to the physical structures in the Salesian centers of Cataño and Cantera in San Juan.

Because of the extensive communication challenges on the island, getting information to Salesian centers outside of Puerto Rico has been challenging. Salesians within Puerto Rico are having difficulty reaching one another. To date, there is still no word or updates from the Salesian communities of Aíbonito, Orocovis and Aguadilla.

“Puerto Rico has been devastated by the passage of the hurricane with 100 percent of the island without electricity. Many people have lost their homes,” explains Father Adan Marrero, a Salesian missionary in Puerto Rico, through a WhatsApp message. “The Salesians have suffered damage to infrastructure, sports grounds, schools and community residences, but we thank God for all the colleagues and our beneficiaries are safe.”

Fr. Marrero also sent some pictures of the parish house, the parish and San Francesco of Cataño. He also explained that calculating the cost of the damage is difficult at the present time because many transmission towers have fallen. They are without electricity so they are unable to truly assess the needs of the community.

Salesian Father Jorge Santiago from the Salesian Center in Cantera was able to communicate the needs in San Juan at this time. He noted the community was in need of medications, canned food, drinking water, mattresses and bed lines, and wood. As they are able, Salesian missionaries will continue to assess the needs of Salesian programs and the communities in which they serve and provide additional information about the relief efforts in Puerto Rico.

In response to the several devastating hurricanes in 2017, including Hurricane Irma and Maria, Salesian Missions, the U.S. development arm of the Salesians of Don Bosco have launched a new hurricane fund to support Salesian programs in countries affected by these devastating storms. Those who want to support these efforts are urged to make a donation online at salesianmissions.org/give-hurricane.

ANS – Puerto Rico – The worst was not the hurricane, but the floods, the destruction and the lack of communications