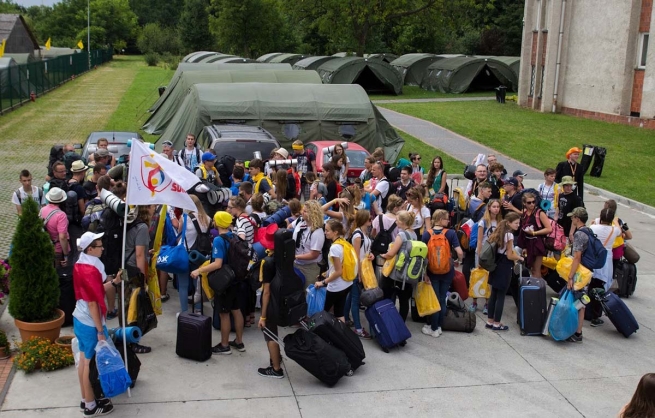 (MissionNewsire) World Youth Day, an international gathering of the youth of the Catholic Church in a week-long celebration of faith, was held in Krakow, Poland July 25 – 31, 2016. More than 500,000 youth from around the globe gathered in Krakow in celebration with more than 5,600 youth from Salesian centers worldwide in attendance. Mother Yvonne Reungoat, Superior General of the Salesian Daughters of Mary Help of Christians, along with the Salesian Provincials from Poland and many Sisters were present with the Salesian youth sharing this profound experience.

World Youth Day was initiated by Saint Pope John Paul II in 1985. In its first year in 1986, Catholic bishops from across the globe were invited to schedule an annual youth event to be held every Palm Sunday in their dioceses. Each year, World Youth Day is celebrated within each Catholic diocese and every two to three years, the international community comes together at different locations. The last international event was held in Rio de Janeiro, Brazil in 2013.

The international event offered youth a chance to connect with their peers and participate in Catholic Mass and community celebrations. They heard dozens of catechetical inputs given by bishops from around the world and also had an opportunity to receive the sacrament of penance. In addition, youth participated in vocational forums, which featured the Salesian Family. Concerts and other cultural attractions rounded out the week-long event.

The Archbishop of Krakow Cardinal Stanislaw Dziwisz gave the opening remarks welcoming the youth each representing their home countries by waving their home flags and wearing their country’s colors.

“You speak many languages. But from now on between us we will all use the language of the Gospel, the language of love, the language of fraternity, solidarity and peace,” said Cardinal Dziwisz in his opening remarks. He went on to encourage youth to bring to the world a “spark of mercy” starting from their homes and from the countries where they will return. He noted mercy was needed especially in situations often marked by hatred and conflicts, with open wounds in the heart of humanity.

Youth attend the event for different reasons but most want the opportunity to experience the power of faith. Some wish to deepen their relationship with Jesus while others hope for an experience of the universality and diversity of the Church in the world. Many of the youth attending from Salesian programs are studying and working to break the cycle of poverty in their own lives though education and gaining employment. These Salesian youth want a chance to connect with their peers, gain a more global experience, and work to give back to their own communities.

During the World Youth Day events, Salesian youth also participated in a meeting of the Salesian Youth Movement, which was held on July 27 at the EXPO Fair in Krakow. Salesian representatives from 41 countries were in attendance. The meeting encouraged youth to reflect on the challenges that the world puts before them in doing the work of mercy and the benefit they gain from this. They also had the task of drawing up the Salesian Youth Movement message to the world, which will be announced in August and will be delivered to Pope Francis.