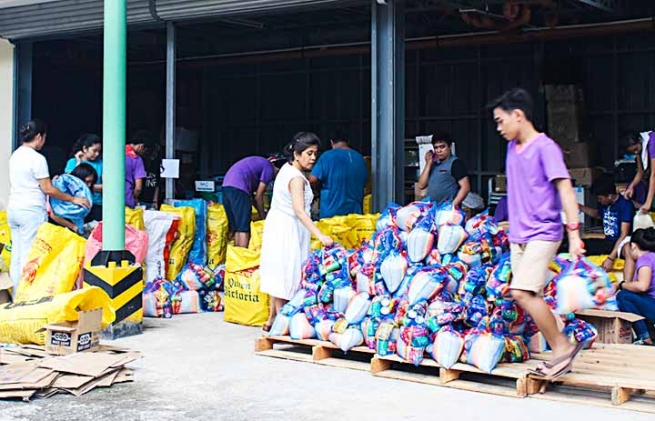 (MissionNewswire) The Salesian Lay Volunteer Organization (SALVO), led by Salesian Father Arvin Abatayo, organized a relief drive for the families affected by the crisis in Marawi City. The Rondalla Youth Group of the Archdiocesan Shrine of Our Lady of Lourdes, SALVO members and volunteers assisted in packing the relief goods, which consisted of 59 bags of food packs for 472 families, 29 sacks of used clothing for 290 individuals, and eight boxes of hygiene kits for 210 individuals.

On May 23, militants from the Maute group launched a large-scale attack on Marawi City, which destroyed and burned down the cathedral of Mary Help of Christians and many other buildings. The group kidnapped many Christian citizens as hostages and the number of deaths in the clashes has risen to more than 500, primarily militants but also soldiers and at least 45 civilians.

Many people were forced to evacuate their homes and as a result have little in the way of clothing and personal items. According to a lay coordinator with the Social Action of the Archdiocese of Cebu, there are approximately 4,000 displaced families, with an average of five members per family registered by the Cagayan de Oro City Social Welfare and Development Office. The families have been staying temporarily with their relatives with no work and with limited resources.

A volunteer from the Archdiocese of Cagayan de Oro disclosed that most of the victims, especially the children, youth and women, have been suffering from trauma. Besides being provided with basic needs, the evacuees also need psychosocial intervention to help them cope with their experiences and prevent the onset of post-traumatic stress.

The relief items were distributed to the evacuees on July 13 under the care of the Our Lady of Miraculous Medal Parish in Barangay Lumbia, Cagayan de Oro City in collaboration with the Social Action Center of the Archdiocese of Cagayan de Oro headed by Father Saturnino Lumba and Father Doroteo Rabuyo Jr. The parish priest and his staff actively worked together with the Barangay Chairman Hon Wilhelm Valencia and others during relief distributions. Salesian missionaries were the first to provide relief intervention in the area.

“Salesian missionaries were able to immediately assess the situation on the ground and move into action providing assistance and relief,” says Father Mark Hyde, executive director of Salesian Missions, the U.S development arm of the Salesians of Don Bosco. “Salesian centers and programs across the Philippines provide for poor youth and their families. The focus is on education, but Salesian missionaries know that they must work to meet basic needs first so that youth can focus on their studies. Because missionaries live in the communities they serve, they are perfectly positioned to respond in times of crisis.”

The humanitarian aid that was provided to families in Marawi City was made possible through the collaborative efforts of several Don Bosco houses, organizations and lay partners including Don Bosco Provincialate, Don Bosco VisMin Employees Multipurpose Cooperative, St. Louis School-Don Bosco-Dumaguete, Archdiocesan Shrine of Our Lady of Lourdes-Cebu, Don Bosco Pasil-Cebu, Don Bosco Technical Institute-Victorias and other generous individuals. The organizing team is also grateful to the families of Rafraf T. Escaño and Jerome A. Escaño who helped in the logistics in Cagayan de Oro City.