PERU: Salesian Missionaries Respond with Food and Medical Aid to Those Affected by Intense Flooding and Mudslides 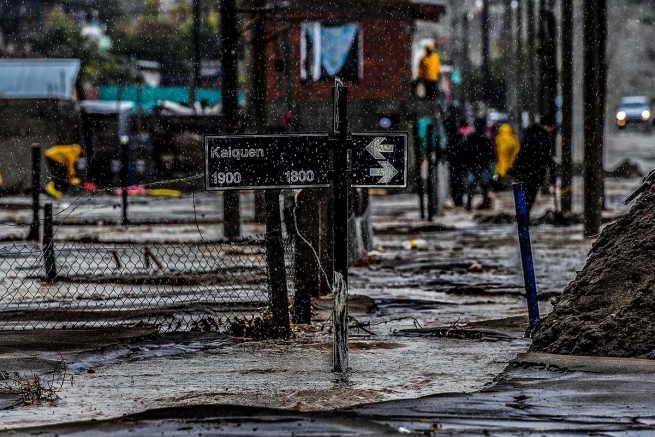 (MissionNewswire) Rains and heavy thunderstorms have continued to exacerbate already flooded conditions in Peru. The latest information from the National Emergency Operations Center reports deaths from flooding at more than 80 since the beginning of December 2016. More than 650,000 citizens have been affected with more than 145,000 properties damaged. The flooding and subsequent mudslides have been reported in 24 out of 25 regions in Peru, leaving tens of thousands displaced, with many having lost everything.

With support of Salesian donations from countries around the globe, Salesian missionaries in Peru have been able to provide hundreds of family kits containing supplies, water, and food including rice, sugar, noodles, cans of tuna and oats. Families are also in need of medical attention. Medicines have been purchased for the Bosconia Medical Center so that it can attend to the medical needs of youth attending local Salesian programs and their families.

In the city of Piura, the sewer drainage system has been completely destroyed as a result of the flooding. Heavy rains, coupled with the destruction of the drainage system, can create a breeding ground for disease and health complications for its residents. Salesian missionaries in Piura are responding to those who need assistance and are seeking funding to launch a project aimed at providing preventative health information as well as materials and supplies. They are also holding informative talks on the safe storage and consumption of drinking water and delivering to each family a bucket tank with lid and brushes to clean it.

“Salesian missionaries are reporting that the collapse of drinking water and sewage systems in Piura is leading to an increase in acute diarrheal diseases,” says Father Mark Hyde, executive director of Salesian Missions, the U.S. development arm of the Salesians of Don Bosco. “Vulnerable people, especially children and the elderly, are particularly at risk of illness and infection. People are also exposed to the concentration of dust particles in the air from debris removal, which can increase respiratory infections and infectious diseases to the skin and conjunctivitis, among other illnesses.”

Salesian missionaries working at schools and youth centers in the regions near Piura are planning to provide up to 900 families with prevention education about these diseases. The information will include the dissemination of key messages that promote basic hygiene practices and the adoption of healthy habits. This work will also help communities strengthen their capacities to adopt operational measures to safeguard against dengue, malaria, diarrheal diseases, respiratory infections and dermatological problems, among others.

The rains that caused destruction in Peru have also hit Colombia, Chile and currently Argentina. The Domingo Savio Salesian House at Comodoro Rivadavia, which provides educational and social development programs through a school, a technical center and a parish, was not affected by the torrential rains, but many of the students and teachers have had their homes flooded. A significant number of volunteers are now helping people most in need in the city of Comodoro Rivadavia, a city that needs to be rebuilt according to its mayor Carlos Linares.

PHOTO by Fabian Massoni (courtesy ANS); May not be used without permission.