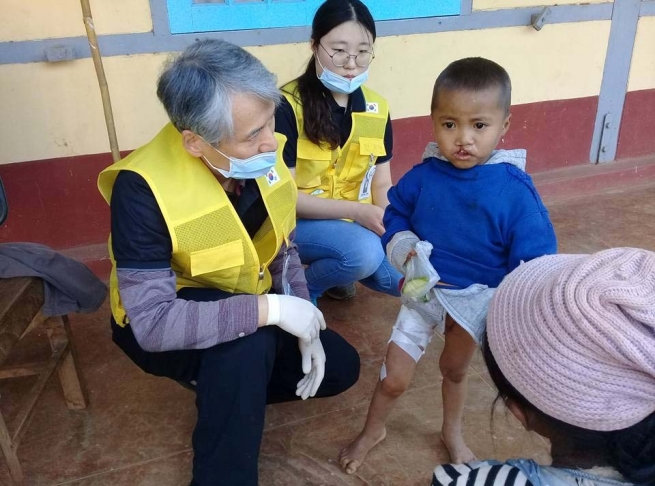 (MissionNewswire) Salesian missionaries recently held a medical clinic for people living in Anisakan, a remote village in Myanmar. Korean members of the Members of Global Union medical team visited the village for the second time to provide medical care to the residents. The Salesian-run Domenic Savio Hall of Nazareth Seminary was transformed into a medical clinic and operating area where doctors and dentists were able to see patients.

Many poor residents in the village have nowhere else to turn for regular health care. The medical clinic was set up to provide much needed medical services including wellness exams for men and women and pediatric exams. More than 2,000 patients who suffer from various kinds of illness were able to access medical care. Patients were given medication, some for up to six months, all free of charge. Doctors also performed minor surgery. In addition, dentists were available to provide care for patients, many of whom had never had a dental visit in their life.

Salesian missionaries utilized volunteers, many of whom were youth from Anisakan and Pyin Oo Lwin, who did their best to translate from Burmese to English. Close to 20 translators gave their time to help those who were sick. Many doctors, dentists and translators even skipped lunch during the medical clinic in order to assist as many patients as possible.

“The work we do in Myanmar and in programs around the globe goes beyond education,” says Father Mark Hyde, executive director of Salesian Missions, the U.S. development arm of the Salesians of Don Bosco. “We aim to serve the whole person by making sure that basic needs like health and nutrition are met in addition to other social service needs. This medical clinic is the perfect example of how Salesian missionaries work with other organizations in their local communities to provide for those most in need.”

While the medical clinic was happening, Salesian Father John Jeon Bok Nam, together with his youth volunteer group, went around Anisakan village and distributed rice to the poorest families. They also rid the environment of mosquitoes with mosquito killer sprays, cutting down on mosquito borne illness that affect the local community. In addition, they painted the guest house of the seminary to improve its appearance.

While Myanmar is the second largest country in Southeast Asia and rich in natural resources, it is one of the least developed countries in the world, ranking 148 out of 188 countries according to the 2015 Human Development Report. More than a quarter of Myanmar’s population still lives in poverty with the poverty rate rising sharply to 70 percent for those living in rural areas. Myanmar also has the lowest life expectancy and the second highest rate of infant and child mortality in the region. Just one-third of the population has access to the electricity grid, and only about half of school age children complete their primary education.