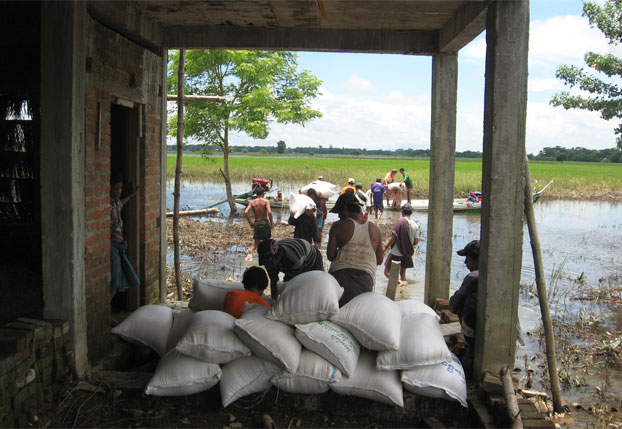 (MissionNewswire) Salesian missionaries in Myanmar continue to provide emergency relief and assistance to residents displaced by heavy monsoon rain and flooding this summer. Myanmar government officials have reported that the flooding has killed more than 100 people and affected more than 1 million. Close to 1.2 million acres of rice fields have also been destroyed increasing concerns of food shortages and loss of livelihoods.

Salesian missionaries living and working in the region are responding to the situation with aid for the flood victims, many who have lost everything. With the support of current and former students and volunteers from the Salesian Vocational Training Center located on the outskirts of the city of Myitkyina, the capital of Myanmar’s Kachin State, missionaries have distributed food, water, bedding and medicine to those affected. In addition, more than 125 Salesian students are assisting flood victims in cleaning mud from their houses and repairing damage. Their work has allowed some flood victims to return to their homes.

For those whose homes could not be repaired right away, Salesian missionaries and students relocated villagers, mostly women and children, to safety by transporting them by boat to local church compounds and state school buildings. In total, Salesian missionaries have been able to assist and provide supplies to close to 60 villages.

“Salesian missionaries were able to immediately assess the situation on the ground and move into action providing assistance and relief,” says Father Mark Hyde, executive director of Salesian Missions, the U.S development arm of the Salesians of Don Bosco. “Our programs are helping to provide food, clothing and shelter to those in need and our missionaries will remain through the long recovery process helping the many families who will be forced to rebuild their homes and salvage their livelihoods.”

The regions most affected include Chin, Rakáin, Magwe and Sagaing which the Burmese government declared a state of natural disaster. The Salesian house of Kalay, a boarding school in the region of Chin, is located at the center of one of the most flood-stricken areas but did not suffer any damage. In the region, there are still many villages where aid has not reached, and some villagers have had to walk more than 10 days from their homes to reach assistance.

There are concerns about long-term food shortages affecting the people in Chin. Most of the rice fields are buried under mud causing residents to suffer the loss of their only yearly crop and their livelihood. Daily wage workers who once earned their food by working in the fields are currently unemployed because the mud-covered fields are noncultivatable and the time of sowing or planting is over.

Salesian missionaries in Myanmar have joined local authorities and other non-governmental aid groups in assessing the damage to determine the best course of action required long-term. At this point, missionaries are addressing the most basic of needs but as the death toll rises, they are reporting massive numbers of homeless people, starvation and vulnerability to infectious diseases.

“The scale of devastation is massive,” says Salesian Cardinal Charles Maung Bo of Yangon. “In a region that is chronically poor, the poor have lost everything and have become refugees. Urgent survival assistance is still needed in many villages and we are calling on everyone we can to assist us in this work.”