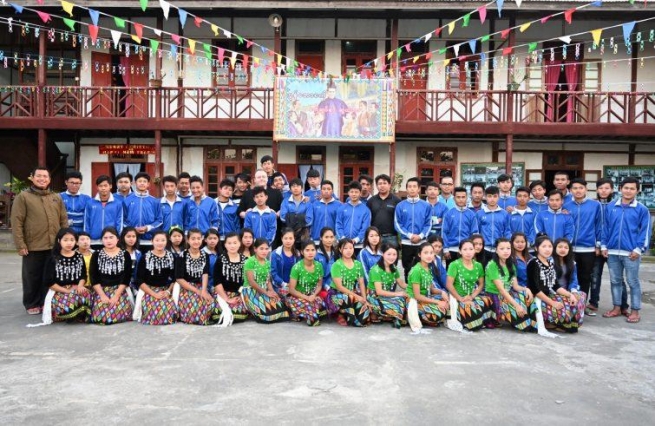 (MissionNewswire) Salesian missionaries operate the Opera Don Bosco Foundation to provide programs for the many homeless and at-risk youth in Myanmar. Recently, the foundation joined the appeal by Salesian Cardinal Charles Maung Bo, archbishop of Yangon and president of the Federation of Episcopal Conferences of Asia, to put an end to all armed conflicts afflicting the country.

To help aid youth in need, the foundation operates several Salesian centers across the country. The Don Bosco Vocational Training Center in the city of Myitkyina is one such center and offers carpentry, welding, electricity, automotive, tailoring, dressmaking and beautician programs. Over the last 11 years, more than 500 young men and women, aged 18 to 25 years, have graduated from its programs.

Because the school is located in the northernmost part of Myanmar within the Kachin State which has a long history of armed conflict, some of the graduates are orphans or come from broken families. The school is operated by a small Salesian community with four Salesian priests, four sisters of St. Paul and eight volunteer part-time teachers/instructors. The volunteers come from various religious faiths including Catholicism and Buddhism and work together to educate the students.

While students are not attending classes and on-the-job training, they are participating in daily chores on the large farm and afternoon sports including kickball, football and volleyball. Students also attend prayer lessons and orientation sessions.

Opera Don Bosco Foundation also operates a center in Chantagon which is managed by the Daughters of Mary Help of Christians. This center offers a covered courtyard where the poorest children in the region can meet to play, study and learn a trade.

In the city of Mandalay, the foundation provides an educational center where former street children can live and study. In Anisakan-Nazareth, there is a center where 153 boys are preparing for public school exams and attending various courses in music, football and theater. In Hlaing Thar Yar, on the outskirts of Yangon, the Daughters of Mary Help of Christians run a kindergarten for children.

“The work of Salesian missionaries in Myanmar and in programs around the globe goes beyond education,” says Father Mark Hyde, director of Salesian Missions, the U.S. development arm of the Salesians of Don Bosco. “We aim to serve the whole person by making sure that basic needs like shelter and nutrition are met in addition to other social service needs.”