MOZAMBIQUE: Salesian Missionaries Focus on Vocational Training to Help Youth Out of Poverty 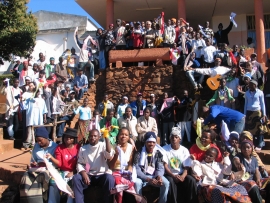 (MissionNewswire) Salesian missionaries operate several vocational training centers in Mozambique. Vocational training helps youth living in poverty gain the skills needed to find and retain long-term stable employment. In the southern town of Namaacha, Salesian missionaries have operated a college for both men and women for decades. This institution of higher learning was often attended exclusively by the children of Portuguese settlers.

When the country gained independence in 1975 and was run by a communist totalitarian regime, Salesian missionaries were forced to leave and abandon their work at the college. Only one Salesian missionary was allowed to remain. Brother António Pedrosa, now 85 years old, was accepted by the regime because he was not a priest.

He was hired to coordinate the educational activities of the college and for 11 consecutive years received a medal as the best educator and teacher. Bro. Pedrosa had to wait almost 20 years before the other Salesian missionaries could return in the early 1990s, after the time of the regime and the civil war. Salesian missionaries still operate the college today along with other vocational training programs.

In Inharrime, north of the capital city of Maputo, Salesian missionaries have a vocational training center that educates 300 students a year in four different course programs. More than 30 boys who attend the school stay in Salesian housing on campus because they live too far from the school. Across the street from this center, Salesian sisters with the Daughters of Mary Help of Christians educate 2,300 students in primary and secondary school and pre-university classes. A boarding house is home to 120 girls, including 50 orphans, who live there while attending school.

“What we are looking for are not the technical skills. In just three months with the company the young people learn their job. What we are looking for is something that only the students of the Salesian centers possess strongly, namely respect for the equipment, punctuality, cooperation, honesty and so on,” said the employer.

ANS – Mozambique – The Salesian presence in the country: formation, quality and fidelity