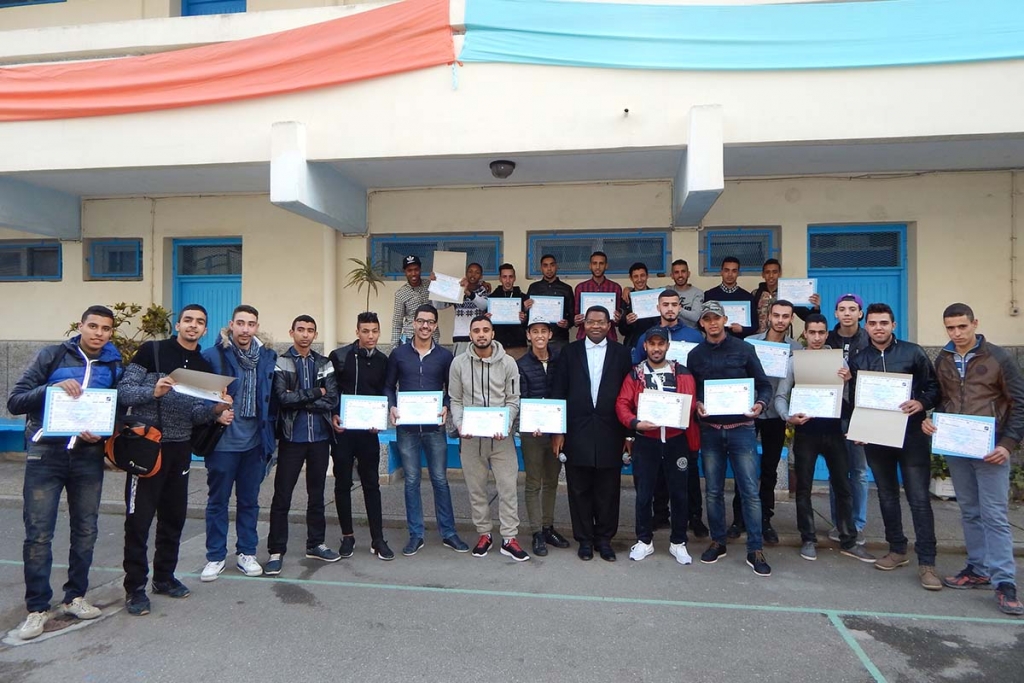 (MissionNewswire) On Feb. 17, 54 students graduated from the Salesian-run Don Bosco Professional School in Kénitra, Morocco. The students gained their education for work in the electrical energy and industrial sectors. Kénitra is a city on the outskirts of the capital city of Rabat and home to close to 800,000 people. Through the Salesian Center, more than 1,200 youth attend elementary, secondary and vocational schools, receiving an education while learning new skills to one day find employment.

Salesian missionaries have been providing education at the Salesian Center since founding its initial elementary school in 1937. After the country’s independence in 1956, Salesian missionaries expanded the school, adding secondary and vocational programs that provide coursework to help local youth access training to meet the local labor market demands.

The Salesian schools in Kénitra offer students a comprehensive education, regardless of differences in religious beliefs. Today, the schools are run by three Salesian missionaries with the help of lay collaborators. The elementary, secondary and technical schools serve predominantly Muslim students.

The technical school directly prepares youth for later employment. Classes are offered in electronics, socio-cultural studies and community education. The College of Don Bosco, a hostel for students attending the École Don Bosco, provides space for extra lessons and other forms of educational support. There is also a library open to the public and a computer center available to the boys at the Vocational Training School in Electronics and the girls at the Girls Training Center.

“The goal is to provide a path out of poverty for poor youth through education,” says Father Mark Hyde, executive director of Salesian Missions, the U.S. development arm of the Salesians of Don Bosco. “Salesian schools provide necessary skills for youth to have success later in life, both personally and in the job market.”

“Through our many programs, the Salesian missionaries offer vulnerable youth the best educational and work opportunities to help them break the cycle of poverty and have hope for a brighter future,” adds Fr. Hyde.

Seventy-five percent of the country’s rural poor depend on agriculture for their livelihood yet access to farmable land is scarce. Many have access to only a limited amount of non-irrigated arable land, which has scant agricultural potential. Poverty is equally prevalent in the country’s mountainous areas and fishing communities along the coast, which are home to some of the poorest Moroccans.