MOROCCO: Cultural Week Aims to Teach Salesian Students and Their Families More About the Life of St. John (Don) Bosco 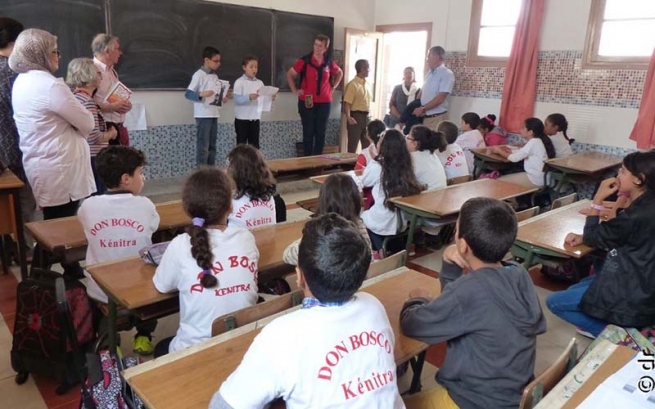 (MissionNewswire) Every year, Salesian Father Antonio Vega, rector of the Salesian community in Kenitra, a city on the outskirts of the capital city of Rabat, Morocco provides a week of culture at the local Salesian school, which educates close to 400 children. This year, the theme proposed by Catholic education in Morocco is “No to violence.” The message is infused in all the educational activities of the school and also extends to activities with parents, educators, conferences and more.

The school, an institution in the city, was founded in 1937. After the country’s independence in 1956, Salesian missionaries expanded the school adding secondary and vocational programs that provide coursework to help local youth access training to meet the local labor market demands.

The school offers education that follows official programs in the country with courses offered in both French and Arabic. All of the teachers at the school are Muslim and the course in Islam is compulsory, except for three Christian students. Fr. Vega’s cultural week works to bridge the gap among religions and heritage among the local people while teaching local students and parents more about the life of St. John (Don) Bosco. The highlight of the program was his morning address.

“This morning I talked about responding to violence with non-violence,” said Fr Vega. “I quoted a passage from the Koran that says you have to protect yourself from violence. You must forgive.”

Many of the teachers have learned and share the principles of Salesian pedagogy. Habhoud Mohamed, professor of Arabic, is a Muslim. He calls himself a “Salesian Muslim.” He is also the author of a book about Don Bosco, which was published in Arabic and was widely read by the parents of the students.

“The spirit of Don Bosco can exist among Jews, Christians and Muslims. I act and I think as a Salesian,” says Mohamed.

Seventy-five percent of the country’s rural poor depend on agriculture for their livelihood yet access to farmable land is scare. Many have access to only a limited amount of non-irrigated arable land, which has scant agricultural potential. Poverty is equally prevalent in the country’s mountainous areas and fishing communities along the coast, which are home to some of the poorest Moroccans.