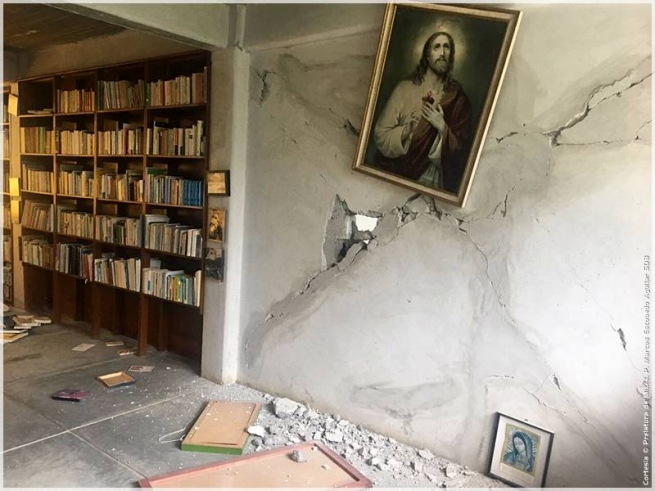 (MissionNewswire) Salesian missionaries have already begun responding with humanitarian aid and assistance after a 7.1 magnitude earthquake reduced many buildings in Mexico City to rubble on Sept. 19. This is the second earthquake to hit Mexico in just 12 days. CNN is reporting that the earthquake has killed at least 225 and rescue operations are still underway. According to Luis Felipe Puente, national coordinator of civil protection for the Interior Ministry, 94 of the deaths came in Mexico City, which has an urban area of more than 21 million people and is one of the most populous cities in the Western Hemisphere.

Salesian schools in the area have cancelled classes and its been reported more than 2,000 public schools also suffered damage. There was a collapse of the Enrique Rebsamen school, where it’s been reported, there are at least 25 children among the earthquake’s victims. The search for survivors is currently underway. Government officials in Mexico report that an unaccounted number of people are staying at shelters around the city after losing their homes and millions remain without power.

“Unfortunately, many people have lost their lives, including girls and boys in schools, buildings and houses. I want to express my condolences to those who lost a family member or a loved one. Mexico shares your grief,” says Mexico’s President Enrique Peña Nieto in the CNN article.

Shortly after the earthquake, the provincials of the two Salesian Mexican provinces, Father Hugo Orozco Sánchez, of Mexico-Guadalajara, and Father Gabino Hernández Paleta, of Mexico-Mexico (MEM), sent a statement affirming that Salesian centers and staff have not been harmed or had property damage. Salesian missionaries are in the process of continuing to assess other Salesian centers and communities and working to provide support to youth and families in their programs and surrounding communities.

Father Ignacio Ocampo Uribe, vicar of MEM, has issued a statement saying, “Since the earthquake, we have had communications with all of our communities, and thank God, all our brothers, collaborators and recipients of our good works are fine. We know that some of our centers have been affected. The Provincial (who is in Turin, Italy) asked me to invite you for prayer, for calm and due analysis to verify the damage of the centers and to not expose anyone to danger.”

One program operating right out of Mexico City is focused on country’s at-risk population, including girls and mothers living on the streets. Through the “Yolia” program, girls and young women are able to spend their days at a Salesian center in the city where they can have meals, receive tutoring, obtain therapy and learn job skills such as jewelry making and hair styling. Some girls choose the residential program where they receive additional education and services while gaining a renewed sense of dignity and self-worth.

CNN – Mexico earthquake: A rush to save lives amid ‘new national emergency’