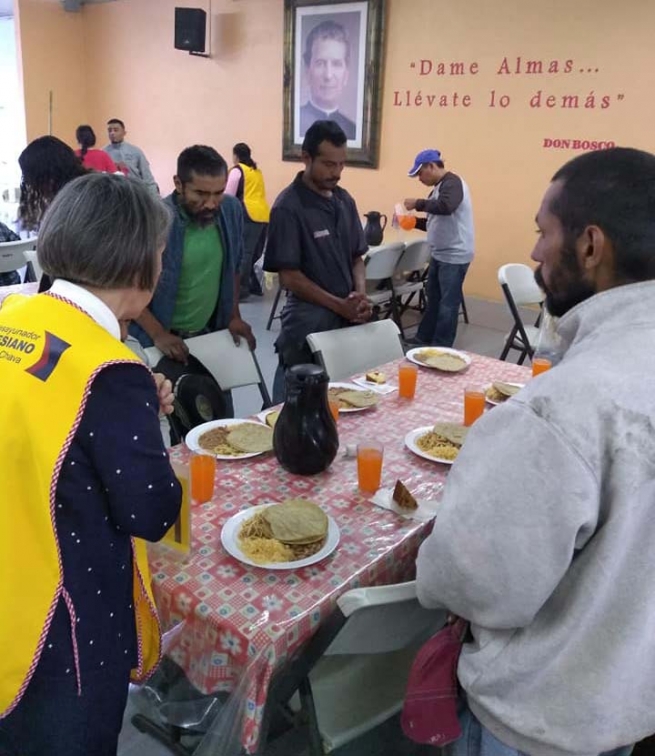 (MissionNewswire) Salesian missionaries are providing services to close to 500 migrants who have just reached Tijuana, Mexico and are from the recent migrant caravan coming from Guatemala and Honduras. Missionaries are expecting thousands more in the weeks to come. Salesian Father Agustín Novoa Leyva facilitates the Tijuana Salesian Project which operates a center, an emergency shelter and the Salesian Padre Chava Refectory.

Father Leyva has indicated that Salesian missionaries are doing everything they can to prepare for the number of migrants expected to reach Tijuana. He says, “From the moment these people entered Mexico, we started to prepare. But in these situations, it is very difficult to foresee everything because unlike the other cities that they were in transit, here the path of the caravan to the United States cannot proceed beyond three months, according to the latest U.S. laws.”

Each day at the Padre Chava Refectory, 900 to 1,200 meals are served with numbers increasing during Christmas, Easter and summer. Recently, the numbers have been increasing due to the influx of migrants. Salesian missionaries are already serving their maximum number of 1,200 breakfasts and they are preparing to continue at that pace. In preparation, they have lined up close to 200 volunteers and supplies estimated to last about four weeks. They have also reached out to other institutions and to the government for help so they can continue their services. However, having never been granted government support before, Fr. Leyva does not think they will get any support this time either.

Father Leyva is concerned about the perception of the migrants and how that will impact the help that’s being given. He says, “Migrants are people in a special situation. Perhaps they are experiencing their crises, and we do not understand their reactions. There are people who when they arrived at the border of Mexico wanted to climb the wall and there were situations of tension. Yes, this situation of contempt is painful because, first of all, they are people, and we know that ours is a country of emigrants. Tijuana is a city that has always welcomed people. I hope it does not change in this case.”

Since 1987, the Salesian Center in Tijuana has been providing services to migrants and poor youth living on the border between Mexico and the U.S. The goal of the project is to create an extensive educational network in areas where poor youth are at risk of social exclusion. The project took shape in Salesian oratories and educational centers where children grow up learning to share faith, culture and sports within their communities.

The Salesian Center acts as a hub for migrants who, in addition to much-needed material help, are offered a familiar and welcoming environment. They can access haircuts, changes of clothes, showers and an opportunity to call or make contact with their families. The Salesian Center also has a partnership with the Red Cross and local volunteer doctors who offer psychological and medical assistance.

The Padre Chava Refectory helps migrants obtain or manage their official papers and documents and plays a very important role in caring for Haitian migrants who in recent months have flocked to Tijuana. In addition, Padre Chava acts as a hub for care packages containing items such as food and clothing that have been sent as aid to those in Mexico in response to recent earthquakes in the country.

Salesian missionaries will continue to assess the situation in Tijuana with the recent influx of migrants and will do what they can to offer support and assistance.

ANS – Mexico – Fr Novoa Leyva on caravan of migrants heading to Tijuana: “They are people in a special situation”

MEXICO: Salesian Refectory Padre Chava celebrates 18 years of service to migrants and those at-risk in Tijuana