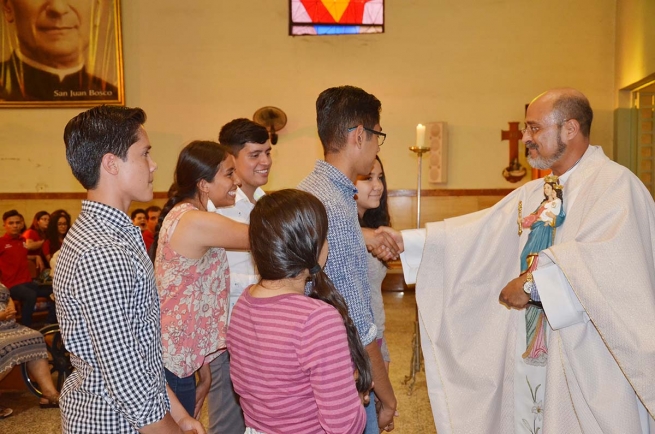 (MissionNewswire) The Salesian Center within the Avenida Revolución region in Guadalajara, Mexico, recently celebrated its 75th anniversary. Celebrations began May 24, bringing together Salesian missionaries, staff and current and past students and their families as well as the community.

Beginning with a Catholic Mass followed by a festival held on the school grounds, celebrations also included a circus art show that ended with fireworks. The show was created in homage to those who have served as a “light” for hundreds of children and young people.

The Salesian Center was founded in 1935 when the local archbishop, Msgr. José Garibi Rivera, entrusted the care of a chapel dedicated to Mary Help of Christians to the Salesians. Soon the chapel became a festive oratory. In 1947, the Salesian school was born thanks to the work of Father Ignacio Sandoval who took care of and provided education to children and older youth in need.

In 1963, the school was incorporated into the Secretariat of Public Education and became the Anahuac Revolución Salesian School serving male students exclusively. A school for girls was also in operation next to the Mary Help of Christians chapel. The two schools and the chapel together comprised the local Salesian mission.

A Salesian in the region, Father Martínez, says, “The success of these 75 years has been the charism of Don Bosco, the way of treating children. We have been a home where they have always been able to feel loved and welcomed. We have become a family, a courtyard where we can meet and make friends, a school where we can find God and discover sacramental life.”

More than 43 percent of the population of Mexico falls below the poverty live, according to the World Bank. Mexico also experienced its most murderous year on record in 2017, and incidences of theft have also been on the rise. High levels of crime come with both direct and indirect economic costs due not only to damages but also the need for costly security measures. Crime in the country has a direct impact on social economic factors for its citizens.

ANS – Mexico – 75-year success at “Revolución”, thanks to charism of Don Bosco