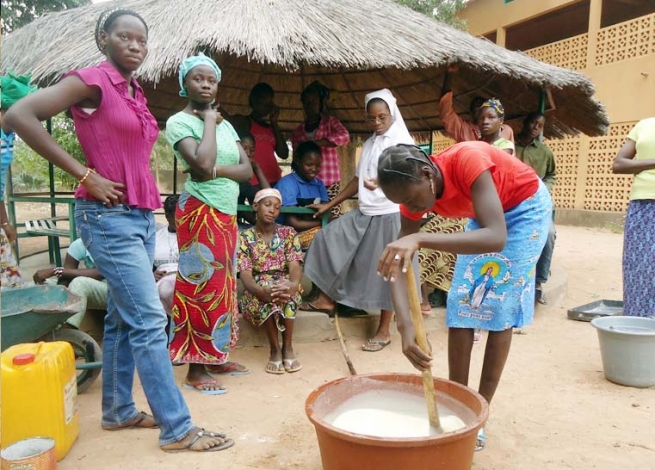 (MissionNewswire) Since 2012, Mali has faced a political and security crisis that has been concentrated mainly in the north of the country. The crisis has now reached the center of the country and is affecting hundreds of people, especially children. In 2017, armed groups in the northern region and the Malian government signed a reconciliation agreement, but in 2018 the conflict reemerged. According to World Vision, currently more than 483,400 people are in need of humanitarian assistance.

As a result of this crisis, the situation in the country has worsened and the population is living in alarming conditions. It has affected access to food, water, health, safety and a means of livelihood. Aware of the current circumstances, Salesian missionaries in Touba have developed a new project for the production and sale of soap.

With this initiative, Salesian missionaries and the Daughters of Mary Help of Christians who work with the most vulnerable populations are offering the opportunity to support local development in an inclusive way and to strengthen the role of women in rural areas. So far, the project has impacted more than 50 girls and young women from the village of Touba. They are being trained in the production of soap and have been able to start a small emporium where they can market and sell what they produce.

“Providing women a way to earn a living helps them to better support their families,” says Father Mark Hyde, director of Salesian Missions, the U.S. development arm of the Salesians of Don Bosco. “We know youth in Mali are dealing with much more than just needing access to education. Salesian programs are tailored to meet the needs of the youth in the communities they serve. Homeless and malnourished youth are simply not able to focus effectively on their studies while they struggle to meet their basic needs. Our services provide food and shelter so youth are able to focus on the education provided.”

According to the World Bank, poverty in Mali is pervasive. Food sufficiency is dependent on the harshness and unpredictability of the climate which is compounded by seasonal variations in the weather which tend to be particularly acute during the pre-harvest period. While Mali experienced an overall drop in national poverty from 55.6 percent in 2001 to 43.6 percent in 2010, regional differences persist and in 2013, the poverty rate rebounded to 45 percent. Mali ranks 179 out of 188 countries on the United Nations Human Development Index for 2015.

ANS – Mali – Soaps that improve lives of women in Touba