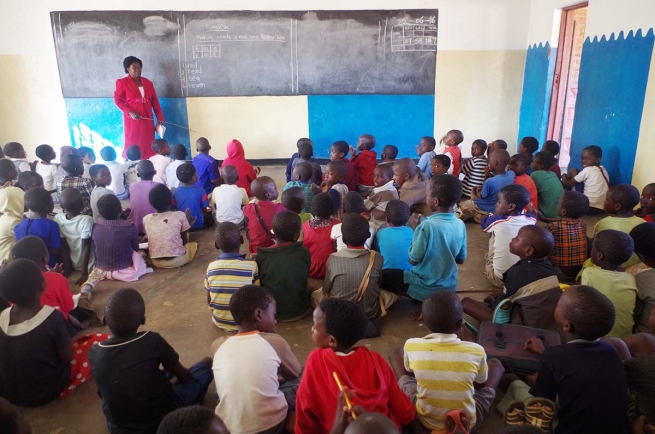 (MissionNewswire) Salesian missionaries in Malawi have been providing primary and secondary education as well as technical skills training for poor youth for many years. In December 2015, the Salesian parish in Nkhotakota, a town in the Central Region of Malawi, was hard hit by a rain storm that caused damage and destruction to some buildings, especially in the school. The students were forced to do lessons outdoors, but once the rainy season in the country began, that could not continue. Over the past 20 years, the Salesian school has tripled the number of students accessing education. Today, 2,700 students attend the school. Thanks to the Salesian Missionary Centre in Warsaw, Poland, funds were raised to restore the school.

“We made use of the space between two buildings to put on a roof and concrete floor, so we gained a new room. Now the rooms have been refurbished and the students have returned to indoor classes which is great to see,” says Father Joseph Czerwiński, rector of the Salesian community in Nkhotakota. “I thank all who helped to restore the damaged buildings. I thank the benefactors of Poland who have made it possible for these young people to have classes in proper conditions.”

Educating poor youth in Malawi has been an important goal for Salesian missionaries in the country. It is the primary way poor youth are able to break the cycle of poverty and have hope for a brighter future. And being able to attend school in a safe and comfortable environment is one step in ensuring youth are able to make the most of their lessons. Students who finish elementary and secondary school levels are able to advance on to technical skills training at Salesian educational centers like Don Bosco Youth Technical Institute in Lilongwe.

The Don Bosco Institute is one of the largest private colleges in Malawi and home to more than 600 students and 30 staff. Courses are offered in a wide variety of subjects including accounting, automobile mechanics, construction, electrical engineering, hospitality management, information and communication technology, and fashion, art and beauty. Edna Chimpeni, one recent graduate, credits the education he received at the school for his success.

“In everything I do, whatever award I get, it is not just me, but it also goes to Don Bosco,” says Chimpeni who is currently an IT specialist at the World Bank in Malawi. “Wherever I go, and whatever I achieve, all these happened only because of this institution.”

Chimpeni further indicated that he achieved a lot in Don Bosco Institute not only academically, but also spiritually, physically and mentally. “Don Bosco not only teaches academics, but concentrates on physical and spiritual well-being.”  He said that hard work, vision, honesty and duty are the guiding stones in his life.

The Don Bosco Institute recently garnered some praise for its excellence in education and was awarded the Century International Quality Era Award in the gold category for quality education, management, commitment to principles and quality of programs.

“We congratulate Father Michael Mbandama, the principal of the institution, as well as the entire Salesian community including staff and students for this remarkable achievement. No wonder youth like Edna Chimpeni perform well in their field of work. It is all because of the qualitative presence of Don Bosco in Malawi,” says a Salesian representative from the Zambia-Zimbabwe-Namibia-Malawi Vice-Province.

Agriculture is a central part of Malawi’s economy but land distribution is unequal and crops are highly vulnerable to the region’s frequent droughts. Few houses have piped water and less than one in 10 Malawians have access to electricity. Water is collected from wells or streams and most cook over an open fire. Malawians deal with hunger and malnutrition on a daily basis. According to USAID, 45 percent of the country’s children under age five are stunted due to a lack of adequate nutrition. Many children also lack educational opportunities and have few options for improving their circumstances.

ANS – Malawi – “My achievement is not merely mine”. The story of Edna