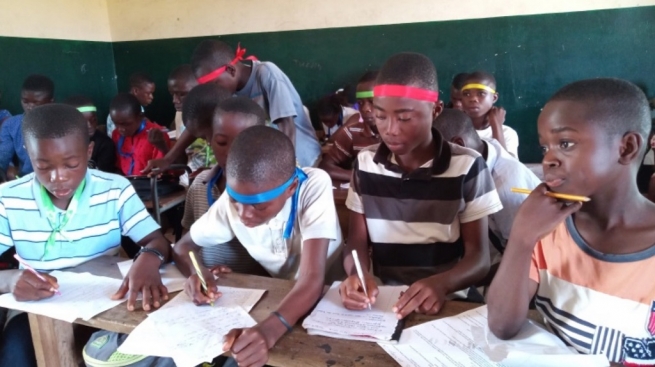 (MissionNewswire) Salesian missionaries in Tappita, a village 400 kilometers from Monrovia, the capital city of Liberia, operate a summer camp for youth during July and August when school is closed. Known as Holiday Camp, the program helps ensure that youth are engaged in safe and healthy activities throughout the summer months. During school breaks, even during the school year, youth typically follow their parents into the countryside to sell bags of water, candies and biscuits to make enough money to put food on the table. The camp provides a time for youth to relax, learn new skills and spend time with peers.

Holiday Camp runs all day and includes lunch. Classes are offered in computers, drawing, music, dance, baking and preparing desserts and tailoring and sewing. There are also social activities that include communal games, quiz competitions, dance competitions and drama performances. Youth are broken up into four teams for camp activities. They earn points by participating in the various games and lessons and at the end of camp, everyone is awarded prizes.

“The summer camp gives youth a chance to remain engaged in learning and with their peers all year long,” says Father Mark Hyde, director of Salesian Missions, the U.S. development arm of the Salesians of Don Bosco. “These additional activities are important, especially in a remote area like Tappita where there is often little for youth to do. Salesian programs continue to grow in the region to meet local needs.”

Tappita is located in the middle of a forest far away from other towns and cities. The last 100 kilometers leading to the village become impossible to travel during the rainy season. For weeks at a time, residents are cut off from the capital city and its goods, supplies, medical assistance and other necessities.

Residents commonly travel by motorcycles which raise large dust clouds in the dry season. At best, it takes travelers 3 hours on rough terrain to reach an asphalt road which continues for another 300 kilometers before arriving in Monrovia. The village has no mail or newspaper delivery but thanks to the internet, residents are not as cut off from civilization as they once were. A market is held once a week. Shoppers come from the surrounding villages to buy items they don’t have in their own communities and to meet with others.

Village residents’ main source of survival is through traditional agriculture and hunting. They are able to eat what they grow and hunt but have no money. Tappita has electricity but the Salesian parish there doesn’t have the funds to bring electricity to the mission building. Missionaries have to charge computers, mobile phones and batteries in the three hours each evening that they run a small generator. They live and work among the local people providing Catholic mass and assistance to those in need.