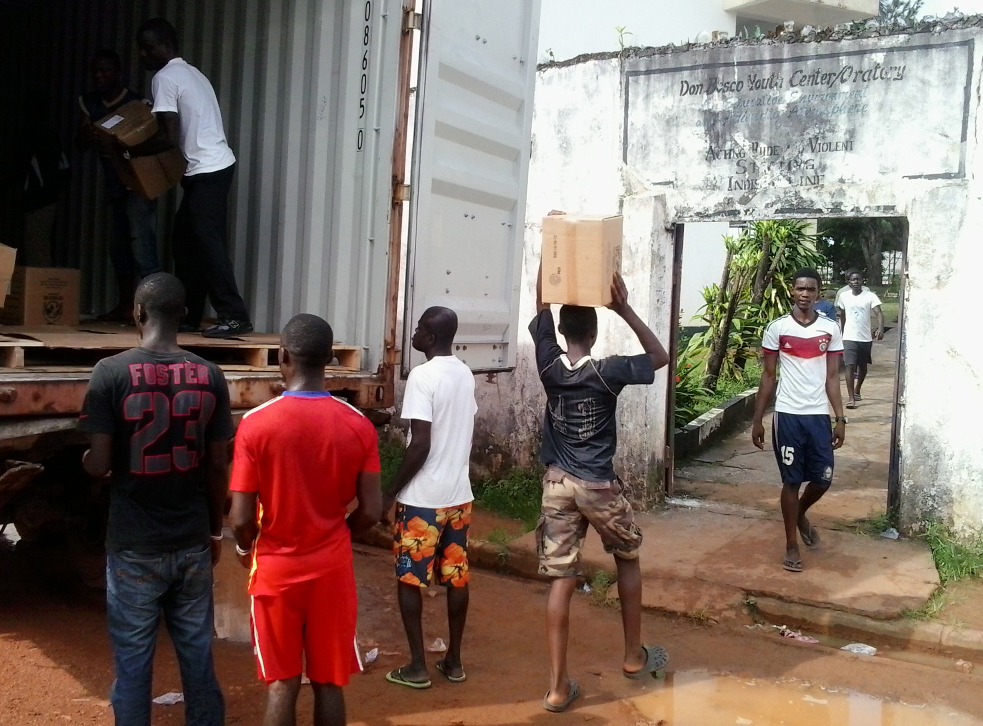 (MissionNewswire) Fortified rice-meals and boxes of hand soap have been donated to Salesian programs in Liberia thanks to an ongoing partnership between Salesian Missions and Stop Hunger Now, an international relief organization that provides food and life‐saving aid to the world’s most vulnerable.

The World Health Organization (WHO) has declared the Ebola epidemic a global health emergency. Salesian missionaries already living and working in communities in Liberia have been providing food aid and education about Ebola while disseminating protective clothing including long-sleeve shirts and cleaning and disinfecting agents such as chlorine.

Recent figures indicate that awareness and prevention campaigns to combat the spread of the Ebola are showing some early signs of progress. According to the WHO, in recent days, there has been a slight decrease in the number of reported cases of Ebola in Liberia. However, the risk remains high with the most recent figures showing that there have been 13,676 cases of Ebola in Liberia, Sierra Leone and Guinea, the three hardest hit countries, and 4,910 deaths from the disease.

A recent Stop Hunger Now shipment of food aid and 48 boxes of hand soap is helping to provide emergency assistance to those affected by Ebola, particularly the young and the poor. The contents of the shipment are being shared among organizations that make up the National Catholic Task Force, including Salesian missionaries, which have come together to address the Ebola crisis.

“Because of the Ebola epidemic, shops have closed, rice production is down and the price of food has risen in the affected countries and many people are at risk of starvation,” says Father Mark Hyde, executive director of Salesian Missions, the U.S. development arm of the Salesians of Don Bosco. “The partnership with Stop Hunger Now allows us to feed those most in need and provides us other necessary supplies to help prevent the further spread of Ebola.”

Education is an important step in stopping the spread of the disease. Salesian missionaries in Liberia have gone door to door providing education on Ebola and passing out prevention materials to over 5,000 people. They have also distributed 500 bags of rice and 5,000 liters of oil to families in need and people and entire communities in isolation or quarantine.

“People at risk are not properly informed,” added Fr. Hyde. “The Stop Hunger Now donation provides another avenue for us to reach people to educate them about Ebola, the risk factors and preventative measures, to help stop the spread of the disease.”

This is the second Stop Hunger Now shipment to Liberia coordinated by Salesian Missions. The first, in October, contained rice meals as well as medical protective gear including gloves, masks and gowns. Salesian missionaries in the country note the need for more medical supplies and assistance for those providing care. With recent aid arriving from countries like the United States, France and England, more medical centers are being built for people infected with Ebola and more beds are becoming available. However, the need is still great. The WHO estimates that Liberia needs about 3,000 beds for the treatment of Ebola but currently has only 620 beds. In addition, there is a shortage of doctors, health care workers and equipment to run the treatment centers. Health-care workers have been particularly hard hit by the disease with 521 infected and 272 dead.

Salesian missionaries in Liberia continue to focus on providing lifesaving emergency aid to those in need while working with community leaders to help with Ebola prevention and treatment efforts.