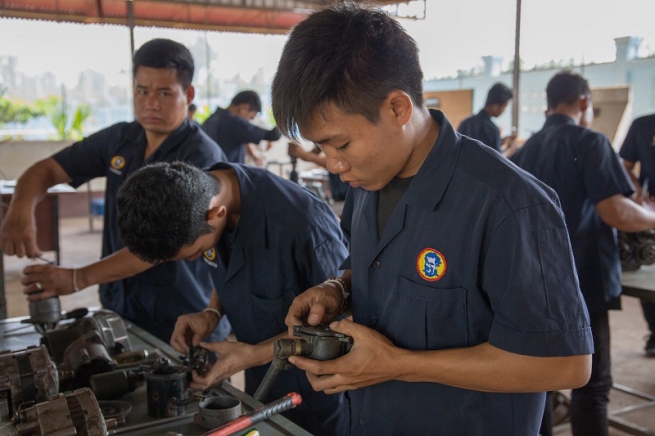 (MissionNewswire) Salesian missionaries first began working in Laos in 2004, when five past pupils of a Salesian vocational training school in Thailand, a teacher and an Italian Salesian missionary, Father Tito Pedron, rented a house to start the Laos Project. They started with 12 students and grew rapidly. By the following year, their enrollment doubled to 24 students. When the inspectors sent by the Ministry of Labor visited, they were very impressed by the professionalism of the teachers and the level of learning of the students.

Laos is a country characterized by a rapidly growing economy, based mainly on investments from neighboring countries, and a very young population. Given that the country is governed by a communist government, Salesian missionaries, while enjoying the esteem of the authorities for their work in the field of education, cannot teach religion. They can, however, spread the Don Bosco preventive system through education.

For this reason, and with the aim of providing local youth more opportunities for the future, the local Don Bosco Center is launching a new project in cooperation with the Youth Union, which is the youth organization of the Laotian Communist Party. The project will take place in the rural community of Vien Kham. The course being offered is an intensive vocational training course to train mechanics specialized in servicing motorcycles.

“Here, where the most popular means of transport is the moped or scooter, it is certainly a winning choice from an occupational point of view,” says Father Patrizio Maccioni, an Italian Salesian missionary in the Thai Province, who asked for help from the Salesian Mission office in Turin, Italy.

The course will be offered to 25 youth, who will be selected from the poorest in the area. The students that the course is targeting have limited means of education because they live in such remote areas. These students will also be hosted in a boarding school during the course. Salesian missionaries are also trying to raise funds to support additional student expenses related to food, accommodations and training for future students.

Many of the ethnic minorities in Laos live in these underserved, rural areas. These minority groups are further isolated by barriers in language, customs and religion. This, combined with geographic isolation, contributes to a higher rate of poverty for those who live in rural communities.

The economy in Laos has been rapidly growing. Not only is the country the fastest-growing economy in the East Asia and Pacific region but also in the world. The growth can be attributed to the fact that Laos is home to a bounty of natural resources that include water, minerals and forests. Additionally, construction and services have expanded and contributed to an increase in tourism and foreign investment.